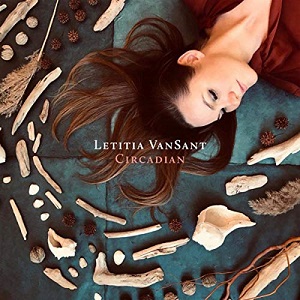 
For those who've not come across Van Sant before, she hails from Baltimore, was a member of a progressive lobby group in Washington D.C. and this, the follow-up to Gut It To The Studs, is her third album. Produced by Neilson Hubbard, it was originally planned to just record a two-song EP, but with session players that included Will Kimbrough, Michael Rinne and Juan Solorzano, she emerged with nine. The album title refers to circadian rhythms, the natural internal physical, mental and behavioural changes that follow a daily cycle, though the circling guitar pattern title track was actually inspired by an article about light pollution and how it causes fireflies to have trouble finding mates and migrating birds being unable to find their way, essentially about the impact of the modern world on nature and "The music the world made before / We drowned it all out with these machines". A reminder that it's in the silence that we hear the most: "The power went out and I learned my neighbor's names/The snow had fallen deep/It quieted the streets/And I felt a precious sense of peace."

It opens, however, with a different form of impact, the spare, bluesy 'You Can't Put my Fire Out' which, written during the Kavanaugh hearings and drawing on her own experience of being a survivor of sexual violence, talks of not allowing an abusive relationship crush your self-worth and how "Too long you've lived inside my mind/You paid no rent, you stole my time/Now I'm taking back what's mine".

By contrast, nodding to The Wizard of Oz and inspired by hearing a podcast called The Lonely American Man, the dreamily gorgeous countrified slow waltz 'Tin Man' empathises with how today's notions of masculinity have left many men emotionally isolated, experiencing difficulty in being emotionally vulnerable and connecting with others. The lyrics paint a heartbreaking portrait of a young boy trying to win his father's affection ("You'd hang around the shop sometimes at the end of a long day/But he'd just lock away his tools, he never seemed to meet your gaze"), bottling up feelings "cause daddy said boys don't cry", and how that suppressed pain is passed from generation to generation, relationship to relationship, because of the inability to speak its name.

Music, of course, is a mean of connecting and that underpins the gorgeous countrified slow waltz of 'Something Real', a song inspired by being at the Kerrville Folk Festival shortly after Jimmy LeFave's death and hearing people singing his songs around the campfires, her voice soaring on a heartswell as she warblingly sings "Someone give me a song to sing that sounds like something real/I want the whole world to know exactly how I feel" because "music is the closest thing I know to a cure".

Too often clinging to an impossible dream or dwelling on what's been lost can prevent us moving on and, perhaps, finding another, and that's the thinking behind the mandolin-shaded shadowy folksiness of 'Most of Our Dreams Don't Come True' with its images of stubborn roots, yellowed papers, a stillborn child and bare cupboards but the message about needing to let go because "When you park the car and walk right past the sign that says dead end/This is when your real journey truly begins/This is when you leave behind all the petty things/This is when you stand up tall and finally shed your skin."

Dipping back into a sparse bluesy feel with a funeral march rhythm, the near six-minute 'Spilt Milk' speaks of her own guilt at how, during her first year on the road, she'd spend endless nights away from home and the resulting impact on her relationship ("I let your love die in the sun") as "You gave me the world, I tossed you the scraps/I left you the parts that I didn't like/My rides to the airport, my dull Monday nights", the brooding, raw electric guitar etching her regret ("I am a criminal, my crime is neglect/There are no excuses for such disrespect/It's not cruel or unusual what I did to you/What rakes at my conscience is what I didn't do") leaving her "begging forgiveness on a beat-up guitar".

Lightening the musical canvas, another slow country with a big chorus waltz 'The Hustle' offers encouragement to those out there chasing down the dream, but again recognises the cost it can involve when you have to "fake it til you make it so try to crack a smile" because "there's no shortcuts on this road you chose so hang on another mile." And it ends with a reminder that sometimes those dreams turn out to be less satisfying than we'd imagined: "Well everybody told you/if you build it they will come/But no one said just who/And no one said where from".

With just enough time left in the session for one last song and one last take, Van Sant turned to 'Driftwood', a poem she'd written about feelings of isolation, taking shape here as, with a melotron drone, minimal guitar pulse and bass drum, as a number about the overwhelming nature of depression which, whatever you may have achieved, has you feeling "The fruit is rotten to the core" and life has no reason or rhyme.

Set to a military drum beat, it ends with the anthemic tour de force of 'Rising Tide'. Originally recorded some years ago with a previous band and a regional hit, it's based on her father's time in Vietnam that led to his developing cancer, six months after he and his wife retired, as a result of exposure to Agent Orange, manufactured, incidentally by DuPont, the same company skewered in Mark Ruffalo's new film Dark Waters, for knowingly poisoning their workers and the American public with the chemicals involved in Teflon. Indeed, the line "They've got plans for our pockets, cigarettes for our lungs / Poison for our babies and bullets for our guns" is a scathing indictment of how, when profit is the bottom line, human life is just collateral damage.

As it builds to a crescendo, she declares, "I can't stop it but Lord, let me try". This album is a battle cry for hope when all we see is despair.

You Can't Put My Fire Out