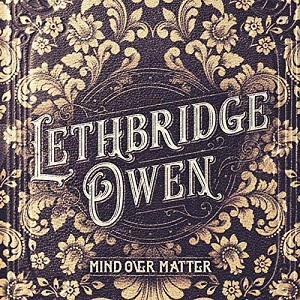 
Mind Over Matter is the debut album from a duo who have already been favourably compared to Fleetwood Mac, and who name an eclectic mixture of influences; from Hendrix to Led Zeppelin via Heart. There has been quite the buzz of late over Lethbridge Owen, and it's not likely to go away anytime soon. This has been an album the best part of a decade in the making, with the duo honing their skills on the stage, and it shows in every track.

Opener All We Have Is Hope is a great statement of intent, and is also the first single from the collection. It acts as a great introduction to Kelly Louise Lethbridge's vocals, showing impressive range and enticing you in. It's easy to see where the comparisons to Fleetwood Mac have come from, with Jimmy Owen's guitar solo sounding straight from Rumours. The song is reprised at the end of the album providing a neat book end to the record.

Stylistically, Mind Over Matter feels like it shouldn't work. It touches on so many genres; there's a bit of folk, rock, blues, and even country. That it never feels a mess or a mishmash is quite remarkable. Having Two Steps Forward and World's Burned Over together is quite a bold choice, they could almost be from two different albums, but instead the contrast just works. The latter is one of the highlights, but is very different to the upbeat country track that precedes it.

Re-Inspire is the second single, and is the perfect combination of vocal and guitar. Owen's playing is incredible as times, a throwback to the 70s but with a very modern twist. Bassist Chris Maresh also appears on the track.

As debuts go, Mind Over Matter is a stunner. It is a collection so eclectic, so assured and confident, that it feels like the kind of album made later in a career. While you can spot some of the influences at play throughout, Lethbridge Owen have found their sound, and it has a uniqueness that is irresistible. This could easily be one of the best albums of the year, let alone one of the best debuts.