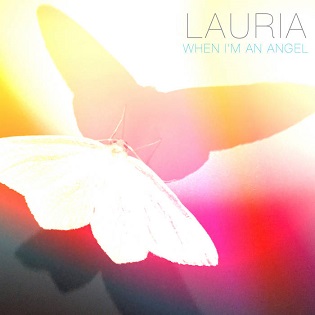 
I had never heard Lauria (Laurianne Fiorentino) before reviewing this 12 track album. 'When I'm An Angel' is distinctive and compelling, and it came as no surprise to learn that some of Lauria's previous work includes theatrical and film soundtracks. Expect the unexpected, but never expect the dull. It is one of those works where you know you are going to have to listen again to absorb some of its clever production techniques. You only have to look at the production credits to realise why!

I could not pick out a 'typical' Lauria track from this album, and it's hard to know which is its strongest point because all elements are carefully constructed, yet it flows freely and nothing feels out of place. All songs are four minutes or more, and all of them hold your attention. The mandolin backed vocal intro sets the bar high. Lauria's vocals are prominent in the mix, which seems to add weight the album's lyrical integrity.

The opening song 'Homeland' successfully fuses gospel, Delta blues, Americana, and jazz influences, but somehow never feels busy or cluttered. It whets the appetite as its upbeat tempo delivers a downbeat commentary on the state of the world, ending with the hopeful message "I can lean on love from here, I always could and I always will". 'Heaven By Water' has a more conventional sound, with an earworm of a chorus, backed by some terrific vocal harmonies, and a striking cello break that grabs you just before JQ Whitcom's trumpet emerges from a supportive role to deliver a fabulous solo.

The album's title track 'When I'm An Angel' was awarded Song of the Year 2017 (South West Independent Music Awards). The song is a wish, has the feel of a single, with compassionate lyrics, and another catchy chorus. The crystal clear acoustic lead guitar reminds me of some of the work in 'Bitter Creek' on the Eagles' 'Desperado' album. Continuing the award winning theme is 'Simple As The Sun' which won a Silver Medal 2017 (Global Music Award). This is another jazz number set against a double bass backdrop, with velvety vocals and spoken pieces that add to the poetry of the lyrics.

Really good albums tend to have songs that change the pace. The piano led 'Moon In The Morning' does just that. Allowing the album to breathe, this is a beautiful love song that demonstrates Lauria's vocal range and builds into something that could and should be the theme song for a romantic movie. If I was asked to choose a personal favourite, it would be 'All Night Rain', the longest track at 7 minutes. This emerges gently from the 'Moon In the Morning' as a conventional country style song that keeps getting better with every bar.

If anything, the second half of this album is marginally stronger than the first, continuing with three shorter songs in succession. 'Digital Radio' is for me possibly the most musically interesting track on the album. There is a lot going on in the background and it takes a few listens to absorb it all. 'Drop (TheWell)' hits you from leftfield because it is essentially a rap backed by jazz beats and harmonica, reverting to a Delta blues theme that continues into 'Please Don't'. Another potential favourite track, the metering of the vocals reminds me of the 'Peaky Blinders' TV series theme tune. A passionate love song - "A star was born on the day that we met. That means we got a good love we are not finished loving yet" - this song trucks along with an understated acoustic drive.

Anyone who has experienced being truly in love will relate to 'Teardrop'. It's one of those tracks that on first hearing you're convinced you've heard it before, but not because it is predictable. Far from it. This probably the best mood of any track on the album with gorgeous cello and bow bass in a flawless mix. It took me a few listens to get into 'Trouble'. Sorry for the appalling gag, behind which is a serious point. It started like a Carpenters' song of old with more of a pop feel than any other song on the album. But as with every track it carries a surprise or to, from the light percussion touch on the 2 minute mark, shortly followed by a keyboard break that would not be out of place on a Bluesbreakers album and vocal rap that springs out of nowhere.

All of which brings me to the final song 'Fire Like You', and another award winner (Jazz Award 2018 - New Mexico Music Awards), where we are back to Lauria's jazz roots. If you were to listen to this album on repeat, the end of the final track would blend perfectly with the acapella start to the first song. I can now disclose that jazz is not a genre I listen to a lot. On this form, Lauria may have succeeded in converting me.

Simple As The Sun