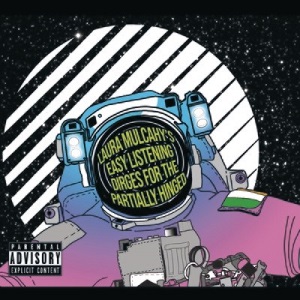 
Laura Mulcahy is a unique singer songwriter, her music borrows elements of folk, 80s electronica and intelligent pop, but then twists it through a Lewis Carroll mirror of wonderful weirdness where everything ordinary is avoided. Producer and musician Wayne P Sheehy calls it intergalactic space folk and music to cook hippies to. Easy listening it isn't, but if it was easy what would be the point.

'A Nuptial Prayer' is a honest set of vows for the start of a relationship or a marriage. Gentle and ever so slightly odd, but tempered by the bitter end that follows in the next track. 'The End' matches Laura's bruised Nico voice with lounge jazz from some sinister hell dimension. Imagine the free form Salvation Army band from Syd Barrett's Pink Floyd swansong 'Jugband Blues', let loose over some tidy jazz guitar. Within this compelling, surreal dreamscape, Laura spits and hisses dark poetry that marks the end of the relationship celebrated in the first song. Like a 21st Ivor Cutler, or the fore mentioned Nico delivering a lyrical punchline there is a brilliant disconnect between the dry voice and the juddery tape jazz. 'Shiverspine' is a sinister evocation over some other worldly Hawkwind electronics and Laura's guitar. If Mervyn Peake had released a Gormenghast concept album then it would sound like this, an eccentric elegy to a spider, delivered by a collection of Heath Robinson keyboards. 'An Odyssey In Hypocrisy' deals with double standards, questioning and tells a dark tale, selivered without rage, the details are starkly presented for you to make up your own mind. 'Sweet Nothings' like 'Disrememberment' is a modern layered folk dance, with a circling drum pattern as Laura tells a domestic love story, everyday small moments balance the bleak big picture. 'Quare Roots' is a curiously tender song given that many of its lyrics sound like soundbites from a door slamming, object throwing, shouted argument. Innocent nursery rhyme imagery, delivered in Laura's clear folk singer voice, build sinister pictures. The bleakly titled 'A South African Photographer Foresees His Own Death' marries Roy Harper guitar with some thoughtful lyrics that ask questions around issues of detachment in the face of uncomfortable day to day reality. The track builds into a very Peter Gabriel ending too. 'No Cat, No Fiddle, No Cow, No Dish, No Spoon' is another sinister song with a great title and atmosphere. There is a superb keyboard motif that is part Third Man, part Get Carter as Laura hisses the lyrics like an emissary from another world. 'Unnecessary Angels' has yet another biting lyric, like wonderfully observed lines of gossip. The characters are set up as hollow perfection in a local paper sensation story, you know a big fall is coming, this is car crash songwriting and you can't turn away. 'Song For Today' has an infectious tune and a kind of summer hit vibe, as Laura Mulcahy, strangely akin to Raymond Briggs' Father Christmas, grumpily considers travel destinations. Inside an at first darkly humorous song she contemplates murder on the local and international scale, ultimately delivering a message of empowerment. Contender for Euro vision I say, let's make them squirm and go down fighting the world of unspoken double standards. We began at the beginning with 'Nuptial Prayer, pressed onto itchy Sunday best at a wedding and we end at the end, with the wonderfully observed 'The Wake'. The words are pure kitchen sink poetry delivered like a surreally dark functions singer accompanied by an electric keyboard.

The album packaging is a complete joy, beautiful imagery that sums up the other worldliness of the music. Insightful too are producer Wayne P Sheehy's wonderful sleeve notes as he battles initially with and then finally for Mulcahy's muse and music. This is wonderfully personal throughout, with a side order of eccentric and unselfconsciously kooky. Real stories and real issues are explored with some strange imagery and sometimes edgy music. Some of the immediately sharp edges of the previous album have been buffed off, but without any sense of compromise or dulling down. There is sharp word play, betraying a singular vision in both the lyrics and song titles. Laura Mulcahy, whether pondering the minutiae of the day to day, kitchen sink dramas just after the acid kicks in, or asking the big questions has a unique and often compelling vision. In this collection of reflections and personal love songs nobody gets called 'baby'. I remember John Peel and John Walters saying they wouldn't include any song that included the B word. Syd Barrett, Roy Harper, Kevin Ayers, Ivor Cutler, Jarvis Cocker, Kevin Coyne Nico, Joolz and a million other unique voices are all here in spirit, I bet Peel would play this in a flash.