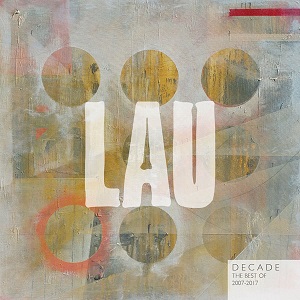 
Ah - time! The history of a folk band these days may seem like an age spent on a diet of spice, such is the almost hallucinogenic manner in which their discography leaps out at you from behind transient agencies, like governments and soap operas. Lau's existence has spawned four albums and of course a number of guest appearances and collaborations. Not only does this retrospective cover their release history since 2007, which exceeds the recording lifetime of The Beatles by two years; it's quite alarming to learn from the sleeve-notes that the band experienced its birth-throes, or at least its conception, as far back as 1998, therefore having just about outlived every meteoric musician from Buddy Holly to John Lennon (“Bad Taste Simile” award going begging here...). So, whilst due a retrospective in terms of their longevity, it has to be acknowledged that this selection draws on a relatively small back-catalogue. As a sampler, however, it has much riches to filter.

Lau as a band coalesced in the Edinburgh area in the mid-2000s, initially around the guitar of Kris Dreever, and the accordion of Martin Green, and soon joined by Aidan O'Rourke on fiddle: a genuine and equal joining of the musical nations, which has produced some astounding variations on the theme over its lifetime.

Opener “The Unquiet Grave” is, perhaps fittingly, the one “trad arr.” to be found on the collection. A stately beginning, with gently nudged accordion overscoring an insistent run along the guitar's bass-strings. Drever's vocals evoke a feeling of mourning and death-embrace, which becomes a message of life. “Hinba”, also from the “Lightweights and Gentlemen” is much lighter in tone, the fiddle carrying the brunt of the tune, and the strummed guitar driving things along, as Green's accordion harmonises; the accordion then assumes the rhythmic weight during the second run-through the tune, before giving way again to Drever's guitar. The second phase of this set “Funny Weather” begins with light trills over the keyboard over pizzicato fiddle and lightly plucked guitar, before O'Rourke drives in over Djangoesque strumming from Drever, then lively dis-chord from Green and O'Rourke resolves into a further run-through which sees the set out. An indication in the first two tracks as to how Lau can veer from the stately to the rumbustious in their live set.

“Gallowhill”, an O'Rourke composition begins with fiddle over guitar, a stately air, with the accordion wrapping itself around the fiddle's melody and the under-stated picking and strumming. The instruments merge almost for a few bars before the fiddle pulls its way out of the mix to finish. Again, a real contrast to the full 14 minutes plus of “The Lang Set”, the last selection from their debut album, although listed as the “2011 version”. Opening with “Come on Wee Man”, reminiscent of The Easy Club, who conducted their own Hot Club / folk styling in the same general area of Old Town Edinburgh a couple of decades earlier, the set breaks down into a mournful accordion and fiddle passage before resolving with a furiously guitar driven closing section.

The next few selections are from 2009's “Arc Light”, Karine Polwart's presence on backing vocals pre-figuring the bands co-release of an EP with her the following year. If “Wintergreen” displays Drever's fondness (like his father Ivan) for a mournfully sung tune, “Horizontigo” introduces the steel guitar of another guest contributor Stuart Nisbet, and gently ups the tempo and the volume towards a climactic interplay of fiddle and accordion. For a three- (and in this case four-) piece band, there is an impressive presence to their sound and the variability of their music, which is further exemplified by “The Burrian”, which again breaks down and resolves mid-track, with a clear sense of aiming for a live sound which keeps a club audience's interest.

“Far from Portland”, the first of the tracks from 2012's “Race the Loser” reinforces this clearly, beginning with treated guitar rhythms, then some nylon-strung guitar making way for gently plucked electric, and accordion which evokes front-room harmonium. The rhythm exhausts itself as the guitar elegantly holds the pace and carries the fiddle and accordion in for the final section. “Throwing Pennies” is another of those gently paced, elegant and slightly mournful Drever / O'Rourke compositions which you could listen to for hours, and “Torsa” again illustrates the band's ability to extend tunes, with 50% of its seven minutes taken up with an almost imperceptible introduction which then gives way to all three players alternatively taking the weight of a lilting, reeling tune, Drever again using the electric guitar to good effect to punch the rhythm through on bass strings, whilst deftly interspersing top notes.

The final two selections are from 2015's “The Bell That Never Rang”, produced by Joan (as Policewoman) Wasser, and are very different in their sound. “First Homecoming”, a slightly sardonic paean to domesticity features plucked fiddle, electric guitar and synthesizers; and then there's “Ghosts” - brought in on a mournful harmonisation hummed over an austere steel-strung guitar, Drever sings of the endless travels of refugees. Fiddle and accordion soar and enfold the simply strummed guitar. The song is a bit of a conundrum for a band which is so manifestly expert, but perhaps exemplifies the weight that a good song carries – and this is a great one, worth getting hold of the album for if nothing else. “Ghosts” also featured on a 2012 EP, in collaboration with Adhem Ilhan, and on that version featured a more experimental (though not overly so) arrangement – clearly copyright may have prohibited, but it might have been worth including that version here to fully illustrate the variety of their work?

However, there clearly is a lot more to Lau than this one song, and the album provides a great introduction to them. Well worth your while!