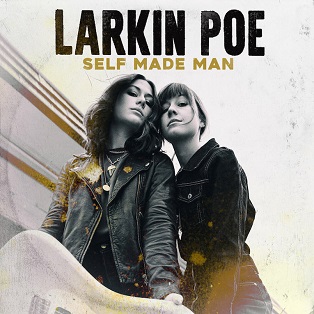 
Georgia sisters Rebecca and Megan Lovell have been changing their sound over the course of recent albums and this continues the move away from acoustic folk in the harder, rockier, bluesier vein of 2018's Venom & Faith. It's made clear from the start with the throaty guitar intro (a homage to Led Zep's 'Good Times Bad Times') to the blues-driven 'She's A Self Made Man' as they declare how they're "gonna juice it up". They do too, complete with searing blues guitar solos, keeping the flames blazing on the frets with the assured riffing swagger of 'Holy Ghost Fire' with its call and holler back chorus and then the handclaps and stabbing guitar riffs of 'Keep Diggin'' getting down and dirty on a song about those who dish rumours and gossip.

Texan blues-rock guitarist Tyler Bryant climbs aboard for Back Down South which, as you might expect from a land "where rock n roll learned to walk" , is another slab of driving in your face attitude riffs, trailing references to Little Richard, James Brown and Charlie Daniels in its scorching wake.

It's not all a bourbon swigging, chilli hot party though, Tears Of Gold And Blue is a handclap rhythm bounce along dose of line dance friendly country sung in the voice of a guy, a Pepsi Cola factory man, looking back on a life to when he he and a neighbouring skinny little kid in Tupelo Mississippi would go hunting down the honeybees, before that kid moved to Graceland, But then its back to the churning bluesy guitar rhythms for the gospel fuelled cover of Blind Willie Johnson's 1929 song 'God Moves On The Water'with its references such disasters as the sinking of the Titanic, the Louisiana great flood of 1926 and the San Francisco earthquake, slowing things down slightly for the rumbling slow stomp 'Every Bird That Flies' then pressing he pedal down again on the urgent heads down, hand clapping propulsion of the love poison 'Scorpion'.

Rebecca on resonator guitar, they hit the final stretch with 'Danger Angel', a sassy Southern spitfire who's "as fast as she is mean", a similar character at the heart of 'Ex-Con', a "mean heartbreaker" who got stripes doing time for armed robbery and is now reflecting on her past and looking "to get back in my mama's good grace".

It ends down on 'Easy Street,' a handclapping, foot stomping goodtime salvational rouser straight out of the revivalist tents about the eternal reward at the end of those hard times with your shoulder to the wheel.

I suspect they've left much of their early bluegrassy fan base behind along the journey they've been taking, but the've surely found a new audience with Rebecca summing up their thinking as "If you're not going to kick down the door, why go into the room" the room is theirs, everyone else can pick up the splinters.