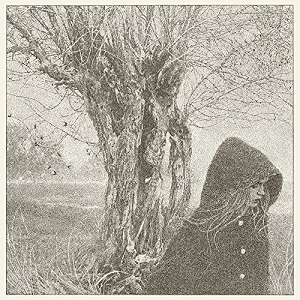 
“The band formerly known as Lynched”: that’s the first thing you need to know. If that doesn’t make you reach for the merch stand at once, without hearing a note of this disc, then there’s no hope for you. The self-styled Dublin folk miscreants’ late-2014 debut album Cold Old Fire, was – and still is, close on three years on – a constant source of inspiration and rarely off my CD machine; I still regard it as quite simply one of the finest loosely-tradition-based albums ever to come out of Dublin. The raw hair-of-the-dog sound of deep tradition, played and sung with absolute integrity, an unrivalled commitment and blistering intensity, embodying the craft and rough-house joie-de-vivre of the best pub session or hooley while liberally bedecked with oddball touches reflecting a myriad of other influences and preoccupations outwith that tradition: Lankum have, in effect, created a new tradition all their own.

The band’s current four-piece lineup has remained constant since 2012, when fiddler Cormac Mac Diarmada and concertina player Radie Peat joined the experimental-psychedelic-folk-punk duo of founder brothers Ian (uillean pipes) and Daragh Lynch (guitar). Their reputation has grown as fearsome as their obvious attitude, with the impact of Cold Old Fire cemented by a fiery, show-stopping appearance on the Jools Holland Later programme and some highly memorable gigs that pursued the now-customary course of spine-tingling original songs and pindrop traditional balladry interspersed with puckish music-hall and body-tapping dance tunes. And the fact that all four of the band are excellent, distinctive singers in their own right and possess the ability to combine their voices in thrilling harmony or unison – well, that’s more than the rich icing on the cake, to be sure!

Their characteristically worldly and diverse repertoire carries on into Between The Earth And Sky, and though broadly familiar in basic concept and scope is still nowhere predictable. The frisson of discovery begins for the listener immediately upon encountering the seriously arresting opening track, where a deep-throated drone ushers in Radie’s extraordinary, visceral vocal performance on a majestically measured, drawn-out rendition of What Will We Do When We Have No Money? (originally sourced, as the helpfully scholarly booklet note points out, from the singing of Irish traveller Mary Delaney). This is the hardest of all acts to follow! But with an utterly typical about-turn of mood and direction, track 2 turns out to be a sparky account of Sergeant William Bailey (by Soldier’s Song author Peadar Kearney), which makes convivial capital out of its multiple turalues, and upon concluding the tale-telling fairly tumbles into a riotous marching-band coda. Bridging the gap to the next phase of the disc is a forthright and succinct a cappella version of iconic concentration-camp anthem Peat Bog Soldiers that reminds us what fabulous harmony singers Lankum are too. Then, in complete contrast again, the band’s daring seven-minute arrangement of The Townie Polka is a brilliant example of the rhythmic panache of the ensemble when playing slowly and feeling no need to play hell-for-leather (though they’re perfectly capable of that when they want to!), where the melody is passed from instrument to instrument underpinned by a solid bedrock bayan drone. The framing device of fade-in and fade-out serves to emphasise the timeless, eternal quality of the cyclic tune.

Next up, the fulsomely scored, almost carnivalesque Bad Luck To The Rolling Water is the first item in the disc’s sequence of three original band compositions, though its tale of love and loss in Dublin City sounds entirely authentic and (one or two contemporary references aside) could well pass for a traditional song. Then it’s the turn of Ian’s impassioned rumination Déanta In Éireann, which, he tells us, started out as an attempt to write a modern-day emigration ballad but ended up as a barbed, yet ultimately proud and affectionate commentary on the plight and conduct of the Irishman abroad (Hard Times Of Old England set to an Arthur McBride rhythm almost?), all intoned against a bare drone which gradually mutates and expands into a disturbed, disturbing and discordant noise (that is, before giving way to a passage of silence before adjourning to the snug for an impromptu swanee-and-kazoo ramble that sounds like a parody of Yellow Submarine). The final panel in the triptych of originals is The Granite Gaze, a rueful, pained meditation which bears the significant dedication “to all of the women and children of Ireland, past and present”; this devastating piece, chokingly sung by Radie as if grating a tender wound, has something of the slightly mournful, antique resonance of Dr Strangely Strange in its queasily shifting harmonium-rich setting. An extended shuddering drone intro then sets the scene (and pace) for a spacious 11-minute account of The Turkish Reveille, one of the many versions of Child ballad The Sweet Trinity which, amazingly, holds our attention through its epic span as its narrative unfolds on an almost primeval parallel timescale. The album’s final track is the hair-raising Willow Garden, a North Carolina version of a “murdered sweetheart” ballad of obscure origin, sung in searingly raw-toned, authentic Appalachian styling by Radie to Cormac’s rustic waltzing, swinging fiddle, with idiomatic vocal harmonies from the lads. Oh, and by the way, its closing line provides the album’s title before a weird, pithy and tonally ambiguous instrumental sign-off. But (in typically unpredictable Lankum fashion) this ain’t the end of the album, for after two minutes of total silence there’s a couple of minutes’ snatch of what sounds like a family parlour recording of a child singing a fragment of a quite undecipherable song that sounds as though it should be familiar but isn’t, accompanied ad-hoc by box and (later) tin whistle.

This proving to be a fruitful autumn for exceptional new releases, and Lankum’s reputation is assured with their sophomore album, another which will go straight onto my year’s-best list.

What Will We Do When We Have No Money