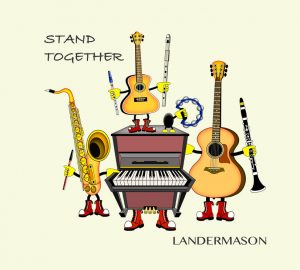 Landermason
Album: Stand Together
Label: Lama
Tracks: 10
Website: https://landermason.com/
.A delightful and un-sophisticated take on pop-folk from this duo of consummate musicians, comprising Fiona Lander, on vocals, piano and reeds and Paul Mason on vocals and guitars.

Hailing from Bellingham, Northumberland, this is their sixth studio album together, although both have been active as professional musicians for many years.

The album has a freshness and energy that is reminiscent of 1960's pop artists, such as Mary Hopkin or Peter Paul and Mary, and is quite unlike anything else that you will hear on the scene today.

The album opens with the title track, a Brexit ballad, a mid-paced rocker, gentle vocal harmonies over a subtle arrangement, alto sax from Lander floating over layers of synth.

Pick me up Again is a slow, talking blues with a New-Orleans feel, Mason sings, rather politely, of bar room fights and life on the road. Well executed with some cool horn arrangement and vocal harmonies. One has the feeling of watching a guest artist on the Cilla Black show circa 1968.

Lander's evocative piano leads into The Water of the Tyne, a jazz take on the trad standard. She had a beautiful voice, a clarity of tone not unlike Karen Carpenter, with a dash of Laura Nyro, swooping between her ranges effortlessly, using her break to propel us into that higher register with passion and verve.

Discover the World, opens with a killer riff and oozes into a waltz, a child's question song, with a rueful twist in the lyrics.

Why do things never seem to turn out like you planned?
I imagined an orchestra, I got a band

Lander gives an accomplished reading of the classic In the Wee Small Hours, with some lovely clarinet. Stood up in the Rain is pure 60s, and could have come from a Disney soundtrack by Louis Prima.

The uke-powered, saccharine-fuelled Messed Up, closes the album, and bounces along, a bittersweet love song, with a music hall feel and echoes of Anthony Newley and the Beatles 'Fool on the Hill'.

This is a joyous, if polite, slice of folk influenced pop, and one that is crafted with love and belief. Some may rue the lack of deliberate and often unmusical atonality in both musical and lyrical styles, (singing flat can be 'authentic' apparently). And it is light and fluffy, and may induce a diabetic coma.

But it's also quite beautiful, honest, simple and direct. And, if you let it, it will make your world a better place