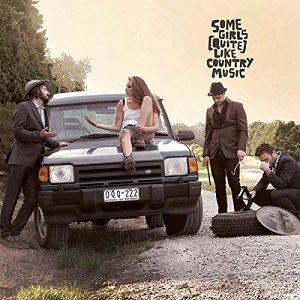 Lachlan Bryan and The Wildes
Album: Some Girls (Quite) Like Country Music
Label: Self Released
Tracks: 12
Website: http://www.lachlanbryanandthewildes.com


Firstly let me say I really enjoyed this album but it is an enigma, a C&W CD far from the wheel spinning, Ye Haa! good ole boy, burn 'em up and spit 'em out, with no thought for tomorrow type of outlook. All the best attributes of country music there, the slide, banjo, guitar, and drums etc. But it is a really melancholic offering. However as was once said to me by a performer specialising in the genre, "there is joy in melancholy" On this album the songs are laced with environmental responsibility and mature perspectives on life. Not least the first song, "I Hope That I am Wrong" (not to be confused with several other songs with the same title) about how in the last hundred years, we have done more harm to our planet than happened in the previous two thousand. Not only environmental devastation but damage to society too, things where our society did things for material gain with little thought to the consequences for future generations. It is a sobering comment on how modern life has affected the prospects for our children. One cannot but agree with the message.

"A Portrait Of The Artist As A Middle Aged Man" is hell of a title for a song, but it does what it says on the tin. The sheer ennui brought about by a dissatisfaction of a life unfulfilled. a life which has accrued little in the way of material benefits. Driving up the coast in a beaten up car with a young woman in the passenger seat who he will never understand, not sure whether he has picked up a Black Widow Spider as a companion. Might as well keep going, not much else to do, nothing much to cheer about either. I know a lot of middle aged artists, most of whom have a much chirpier outlook, there again... there might be one that comes to mind...

"Careless Hearts." The third track, delves into more traditional C&W fare, love gained and lost, stick at it through difficulties encountered on the way through life. The percussive backing on the off beat driving us to bear with the obstacles in our way and keep hold of what we have in case we find no better alternative. Hardly the most compelling love entreaty, but a more pragmatic, practical suggestion. Better to be reasonably happy than miserable.

"The Basics Of Love." A waltz time account of a relationship that has soured. The woman got what she wanted, but not what she needed, he got bored and went out drinking, now they see each other every two weeks, neither is happy they are missing one vital commodity, basic love. But what else is there? A good vocal duet by Lachlan Bryan and Shanley Dell.

"Sweet Bird Of Youth." A reflective song containing a nice electric guitar treatment sung in the small hours in a smoky club, of how the man regrets letting his love go when he got restless instead of fighting to keep her. Now he is lonely, drinking and sneaking whatever affection no matter how fleeting from whatever source is available. He dreams of the times when they used to sing and play, go back to her place and just sit in the kitchen until dawn comes. He forever longs for his Sweet Bird of Youth. Apparently this song took eight years to write/develop, it was well worth the wait.

"Don't Take It Too Bad." Another duet, this time with Lindi Ortega, which in the context of this album is almost an uplifting song from 1969 Written by Townes Van Zandt:
"Don't you take it too bad
If you're feelin' unlovin'
If you're feelin unfeelin'
If you're feelin' alone
Don't take it too bad."
and later,
"Cause it's a sad, lonesome, cold world
And a man need a woman just to stand by his side
And whisper sweet words in his ears about daydreams."
In other words He loves you even if he doesn't tell you.

"It Tears Me Up." The up tempo intro tells the listener that this song is different to those which go before. The subject matter is however not dissimilar. Our hero is really keen on dancing with a particular girl, but as the lyrics say, "there's nothing more revealing than the naked honest truth." she turns him down every time he approaches her and it tears him up when she does. He knows how the evening is going to end but he can't help himself. You never know, she might just say "yes" one time.

"Stolen Again" back into slow 3/4 time for a tale of a guy who has lost his girl. A friend tells you she's gone but won't admit to missing you, all your friends saw it coming, 'cos girls like her always get stolen again. There's a vacancy in your bed, but you still have your health and your friends. It turns out that your sympathetic friend stole her away. but he too has no lost her because girls like that always get stolen again, - still friends? The pace of this song is almost ponderous, but it befits the sadness depicted.

"In New York" As might be expected NYC brings a bustle to this song, "you gotta eat in China town at least once." See the tourist attractions, Brooklyn Bridge built by believers, but you have to learn to live in New York to survive. The driving drums reflect the constant throb of the city that never sleeps. A beautifully skilful guitar solo brings this track to it's end fading into the distant, but never quite stopping.

"Peace In The Valley" A nostalgic look back at things as they were. The simple voice over guitar treatment adds to the melancholy of the message here. The girl he left behind promising and intending to return, met a soldier for a while and learned how to lie. Peace in the valley is a delicate thing, so when he got the call from her mother, he admitted he was not alone. The girl searched for him through the cold dark valley alone, seeking the life she envisaged with her mother and him.

"The Cemetery Near My Home Town." This is another "wandering musician travelling but still hankering for home," story. However, in typical Lachlan Bryan style it is well told and involves us in the thoughts of the musician involved. We are treated to the reasons why he left in seek of fame and fortune, but he still loves his home. In the backing there are soaring high guitar notes which give a poignancy to the lyrics.

"Someone You Know So Well" This melodic offering is telling us what it means to love someone for who they are, not what they might become. It is a romantic song featuring all the elements in a good country song. The narrative is clear and Lachlan's diction is perfect, always good for listener involvement.

The sound of this album will appeal to all who (quite) like country music, even though the band hail from the antipodes. Their unconventional approach to music is well illustrated by this statement from their website: "Blood was spilled on the studio floor, many songs were harmed or even killed in the process of making this album. Pianos were deliberately detuned, expensive guitars were accidentally crushed (and later repaired). Songs were re-recorded because they were "played too well" the first time around, and lyrics were rewritten because they were "not mean enough". We even delayed recording a month because Shaun's bass strings were "too new". Also many songs bear titles shared with other songs, so if you recognise the title, do not assume you will know the song.

This Australian based band mixes an authentic country sound, with more contemporary influences, Leonard Cohen and Billy Bragg amongst them. This not a laugh a minute album, but if you take time to appreciate the story telling, the effort to do so is richly rewarded. It is different and enjoyable. The front cover of the sleeve (which is almost completely bereft of credits by the way) is shown above, but the picture on the reverse amused me. It shows a car with a flat tyre and whilst three dudes consult the handbook, their rather tarty looking girlfriend, just gets on with changing the wheel.

I Hope That I'm Wrong