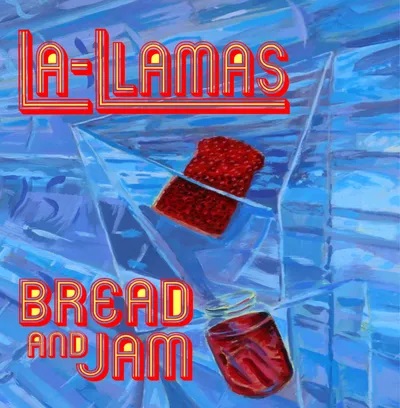 
Variously reminding me of McGuiness Flint or a bluegrassy Proclaimers, Aberdeen duo La-Llamas brings together Davy Cattanach and Paddy Buchanan, both playing guitars with the latter also handling banjo, percussion, double bass and organ, their debut release a concoction of Americana and Celtic folk influences.

It's got an upbeat, goodtime vibe, their musical stall set out from the start with Jacked Up, even if the lyrics don't necessarily reflect this, Buchanan's banjo and hand percussion colouring the bluesy 'Gabriel' with its gospelly backing vocals. The album title rears up in 'Pine Marten', a fun bluegrass nonsense song about the bushy-tailed animal from the weasel family to be found in the Scottish Highlands and Grampians, while the duo also feature the eponymous 'La Llama', meaning the flame in Spanish, the track featuring guitars behind a choppy percussive rhythm .

'Media Schmedia' is another jolly musical romp with a playful social commentary that rhymes democracy with hypocrisy, the sort of thing you might hear on some jug band front porch session, the pair staying up in the pines for the simple banjo and guitar well-travelled swayalong 'Been Away Some Time' warmed by the burn of an old flame when the past comes knocking.

So much for the bread, moving on to spread the jam with a chirpy banjo backwoods spiritual they pose the question 'Do You Need Jesus?' with Jennu Sturgeon on backing vocals on another track rippled with social comment ("we're all still slaves to the rich man"), proceeding to travel down that banjo-ploughed 'Well Worn Road', experiencing the stomping 'Highs and Lows' and catching sight of 'The Big Picture' with the air of a couple of amiable hicks chewing over their grumbles with the world round some copper hooch still while the woodsmoke curls in the evening air.

Singing in harmony they close up with the dappled, rippling rustic rhythms of 'Glimpses' before mounting up and riding away on the rhythmically jerky folk blues 'Horses' wondering "where did the time go?" Who knows, but this is a great way to spend it passing.