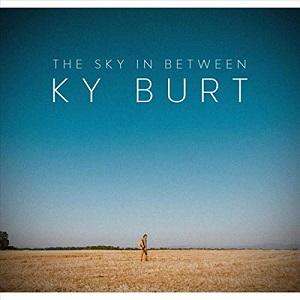 
American singer-songwriter Ky Burt has been honing his craft for many years - The Sky In Between is his debut full-length studio album that finds its inspiration from the natural sounds and landscapes of his home country.

And I have say this a tour-de-force, Ky's songs range from spine-tingling stripped-back arrangements to a lush full band sound. You'll find nods to the past and an optimistic future, with flourishes of jazz and gentle fingerpicking, and a beautiful album that's packed with finely-crafted Americana songs.

The opening Midwestern Sky sets the tone; a lilting song that evolves into a full band production that's sympathetic and restrained.

The vocals are clear and confident throughout. There's the banjo-infused Hard to Reach with its lovely violin that lifts the song. On Idaho, the lure of travel sits at the heart of the song, which has a more upbeat country feel, thanks to some tasty pedal steel. The bittersweet All That I Left Behind highlights Ky's guitar and vocals. The same can be said for The Woodstove Song.

Back To The City has a totally different feel, an insistent beat and jingling electric guitar, but it is nonetheless successful.

Midnight Cigarette takes us in another direction, with its jazzy chording and violin. The plight of small towns everywhere is highlighted on Small Town Dream. The slower Maple Grove is one of the album's highlights; a plaintive vocal and guitar tell a story of wanting to contact a departed elder in challenging time. Mesmerising.

The album concludes with the banjo-led Seeds In The Dirt, a story of optimism which features some lovely highly-strung chiming guitar.

In his liner notes Ky thanks his parent for "giving him wings to fly". On this evidence he deserves to fly really high.