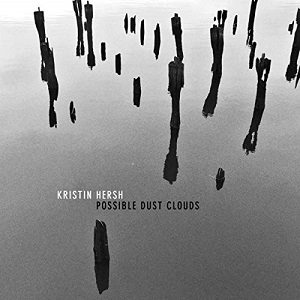 
Having reviewed band member Fred Abong's "Pulsing" EP earlier in the year, I wasn't about to pass up the chance to review Kristin Hersh's self-produced "Possible Dust Clouds". They call it art-punk, art rock, alternative rock, but this isn't 'music for labelling' any more than when The Velvet Underground challenged the music world in the late '60s with their vibrant, innovative, and unapologetic sound. Undoubtedly influenced by the Velvets, Hersh formed 'Throwing Muses' with step-sister Tanya Donnelly in 1983 and took their Rhode Island sound to the world, eventually taking the lead role in the band after Donnelly left in 1991. They were grunge eight years before the term was coined, and Hersh's innovative spirit continues into this album.

There is a beautiful chaos about "Possible Dust Clouds" (in her own words, "this chaotic party") which seems to show that 'Rat Girl' is still very much an influence on Hersh's music. It's real, it's loud, it's gutsy. There is no pretence about this album, and its 'in your face' live feel is so refreshing in these days of clinical production. With the exception of "Lady Godiva" this is an album of sub four minute songs that hits you square between the eyes from its opening song "LAX", which just stays with you.

The opening chords of "No Shade In The Shadow" has echoes of Tom Verlaine. The instruments belt out uncompromisingly behind Hersh's compelling vocals. You don't need to be spaced out on hallucinogenic substances to appreciate this album. It's a drug itself. The pace drops with "Half Way Home" but the vocal venom smashes through you. This is guttural stuff, and it pulls you in, then finishes with gentle strings as if to say that beneath the aggression is a vulnerable spirit.

The start of "Foxpoint" continues to lull you into a false sense that this album has entirely changed pace. It is temporary, blown apart by a riff similar to '25 or 6 to 4' by Chicago when they were innovative. "Lethe" follows hot on its heels with Hersh's at times gentle, at times rasping voice knitting together bass and percussion rhythms and raw electric guitar. At the same time this song is its most acoustic moment until "Lady Godiva", and for me is the stand out track on the album.

Unsurprisingly there's a punk feeling to a song entitled "Loud Mouth". This feels like it's straight out of a teenage locker, which seems to confirm how fresh and connecting Hersh's music still sounds. The album's shortest song "Gin" continues the theme with grunge chords abounding throughout, creating the kind of atmosphere that you would find in a smoky basement night club. "Hope gin. New Year's Eve again. I know it makes you swallow hard". Those atmospheres of course can never be recreated because smoking is now off the menu, but "Gin" is a good substitute.

"Tulum" is a Mexican coastal resort, and like most coastal towns has its challenges: "only the tequila's safe to drink". It's a commentary on the dysfunctionality of Mexican society in these days of drugs and gangland executions and contrasts tourist glitz of the town with its rotten underbelly. "Breathe In" feels like Hersh saying to the world ' Here I am again. I haven't changed. My music is fresh as ever'. "You're rawer than you were. You punctured your cocoon". And she's right.

Hersh and Abong toured the UK recently together with Rob Ahlers of 50FOOTWAVE. They played in Salford just a few miles away from here as part of the promotional tour for this fabulous album. I was away at the time so reviewing it is something of a consolation.

"Possible Dust Clouds" also has contributions from Chris Brady (Pond) on vocals and bass, Throwing Muses' David Narcizo on drums, and Kristin's son Wyatt True. The Velvets, Patti Smith and others may have helped Hersh find her path in music, but she quickly became an influencer herself, empowering and encouraging others to put their art out their with courage. The epic "Lady Godiva" concludes this fine album, with Hersh's voice at its uncompromising peak. It is a gorgeous way to end. But make no mistake, there will be much more to come.