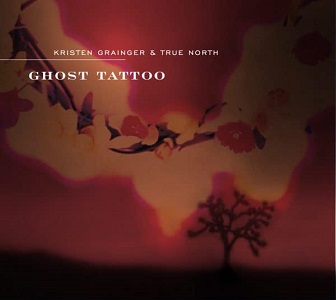 
Performing variously a duo and a quartet, both formats feature multi-instrumentalist Dan Wetzel and Grainger, former communications director for Oregon Governor Kate Brown. On album though, it's the full works with bluegrass stars Martin Stevens on mandolin and fiddle and Josh Adkins on upright bass, that sound to the fore on bouncy wisdom dispensing opening track 'Keep The River On Your Right' for those times when you're not sure of where you're going.

Shaded with backwoods blues, the Bible-referencing 'Jeremiah's Tree' is sung from the perspective of a small-town carpenter trying to keep his head above water while taken at a sprightly mandolin-led folksy pace, fiddle adding its tones, 'Tattooed Love Song' tells of romance striking up between a whose car's on the blink and the tattooed divorcee Mexican mechanic at the Texaco who fixes it, and puts a spark back into her life as well.

The first of a clutch of covers comes with The Secret Sisters' brooding Southern gothic 'Mississippi' ("Brought you in this world and I/Can take you from it just the same") immediately followed by Cahalen Morrison's 'Down in the Lonesome Draw' with sparkling mandolin and choppy hand percussion jogging it along. The two others are, the duo trading verses, Darrell Scott and Tim O'Brien's playful secret self 'When No One's Around' and a banjo romp through Peter Rowan's 'Lonesome LA Cowboy'.

Returning to their own material, the album's title partly lies in 'Ghost of Abuelito', a song written in response to Neil Young and Project Amplify's awareness raising campaign about the American administration's abuses along the US-Mexico border, the song sung from the viewpoint of a couple of kids being unjustly detained and separated from their parents. There's a political edge elsewhere too, 'She Flies With Her Own Wings' inspired by her time with Governor Kate Brown and addressing the institutionalised abuse and disenfranchisement of women and the determination to rise above "the bruises and bee stings" while the mid-tempo choppily percussive 'Light by Light' concerns abuse that turns the victim's love to the abuser's advantage and the woman's declaration that "I got no use for hurricanes anymore".

'Wishes & Dreams' puts the spotlight on Wetzel's bluegrass chops as he works the tune of Jerusalem Ridge into a song about wishing to recover a love where the fire's gone out, the remaining number being the fiddle slow waltzer 'Fine Young Companion', Wetzel singing lead on the tale of the singer striking up a conversation with an old guy, a Vietnam veteran, who's clearly down on his luck who offers him hard earned advice about quitting the big city dreams and taking to the mountains to "fish all those rivers and streams".

They're working a fairly crowded musical territory and I'm not sure this is strong enough to translate into an international breakthrough, but it's certain to consolidate their audience and snare those looking for new discoveries.

Twist In The Wind