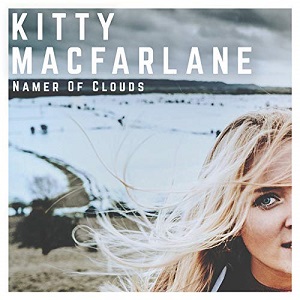 
Two years on from a debut EP that saw her hailed as one of the emergent names to watch on the traditional-influenced contemporary folk scene, recorded under the auspices of producers Sam Kelly and Jacob Stoney, both of whom also play on the album, Somerset-born Macfarlane make her full-length bow with an album influenced by and drawing on the natural world, touching on themes of climate change and migration.

It's not just in the found sound of birdsong that gives album opener 'Starling Song', on which she sings unaccompanied save for backing drone and muted rumbling drums, that you can almost hear the air shimmer, her voice at once fragile and assured. The shortest number, it's followed by the longest, the near five-minute title track, a song about Luke Howard, an amateur meteorologist who, in 1802, devised the system for classifying clouds according to type, extending on a shimmering arrangement to question mankind's attempt to control the heavens.

Fading out on lapping waves and laughter, it seamlessly flows on the sound of a waterfall into an ominous drone backed reading of 'Morgan's Pantry', a traditional Somerset song about the local sirens that lure local fishermen to their deaths.

The second longest track, the migration metaphor of 'Glass Eel' (based on the European eel's annual 4000-mile trip from the Sargasso Sea) affords a showcase for Tom Moore and Graham Coe on violin and cello, respectively, before offering a new recording of the beachcomber-themed 'Wrecking Days' from the EP, here given a fuller Richard and Linda Thompson-inspired arrangement with Jamie Francis swapping banjo for a piercing electric guitar solo.

After such a muscular number, 'Dawn & Dark', a lullaby of optimism written for a friend's new baby, comes a feathery contrast with Archie Churchill-Moss on melodeon before the second of the album's traditional songs, this time drawing on the Appalachians for the simple acoustic guitar-backed 'Frozen Charlotte', the cautionary tale of a young woman who, through vanity, refused to wear a coat as she took a sleigh to a New Year's Eve ball and subsequently literally caught her death of cold.

Returning to her native haunts, sung in an almost coy manner, the fingerpicked and cello adorned 'Man, Friendship' draws on the Somerset Levels floods of 2014 for a climate change lyric about the relationship between man and nature, the former's obsession with material things and the latter's power to wash everything away.

She draws down the curtain with a setting of Gerard Manley Hopkins' poem 'Inversnaid', written a century and a half ago about a stream feeding into Loch Lomond, its eco message ("what would the world be, once bereft of wet and of wildness") no less resonant today, the album ending as it began with the sounds of the wind and birdsong. To borrow from Howard, her career is about to go stratospheric.