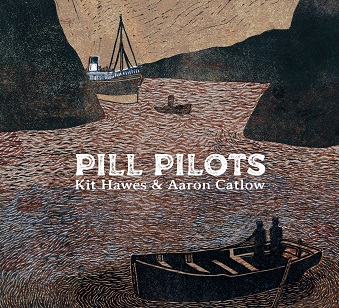 
PILL PILOTS is the second album from the Guitar and fiddle duo Kit Hawes and Aaron Catlow. The Pill Pilots were a group of highly skilled mariners who for a thousand years guided tall ships through the treacherous waters of the Bristol Channel and the river Avon, named for their home village, rather than a Frank Herbert or Dune inspired pharmaceutical dependency that aided their navigational prowess. The song illustrates Rosanna Morris' atmospheric Lino Print that covers the album's gatefold sleeve. "Pill Pilots" starts with a raw fiddle and vocal duet, becoming a lively song driven by Kit Hawes' percussive acoustic guitar and Aaron's emotional fiddle. A Catlow song, though its historic story telling and arrangement make it sound traditional. "I Know My Love" is love song and a beautiful duet. The easiest reference point again and again, as the fiddle and guitar weave together is Martin Carthy and Dave Swarbrick. " I Know My Love" is a song I first heard performed and recorded by Whippersnapper, a band founded and forever connected to Swarbrick and strengthens the connection.

The album PILL PILOTS was recorded live in one room and the realtime relationship between the two musicians, their voices and instruments is one of the real strengths of this set. "The Yellow Handkerchief", that traditional tale of trying to keep up with rich friends, crackles with a real sense of the space around both players. The tempo allows every nuance of the vocals and lyric to sink in and the instruments to tug at your heart strings on a powerful version of this song. "Kellaways" and "The Warreners" are sets of original tunes, there is dialogue between the fiddle and guitar that is a delight to listen to, two players, two sets of strings and the space around them hold your attention so completely. "The Sheepfold" is a traditional song that explores the idea of someone with power and influence attempting to exert his will over an impoverished milk maid. Having bought off Betsy the squire attempts to have his way, in the struggle the squire comes off worse. There is power and pathos in the telling of this tale and the playing around the telling. The ending is ambiguous and we are left unsure of the squires final fate.

"Flame Of Fire" is another cautionary tale with an arrangement credit from Martin Carthy you can hear him in the cadence of the voice and Kit's guitar. It is a powerful piece with the guitar driving the tale on while the fiddle hints at the supernatural ex-lover the hapless sailor is pursued by. I'm not a player, but there may be a hint of Carthy's March in the guitar part of the tune. Steeleye Span felt moved to record a version of "Hard Times Of Old England" in the 70s, the present relevance of this tale of Napoleonic War home front hardship merits its inclusion here. Kit Hawes and Aaron Catlow's version has a weight and gravitas equal to its content, balancing emotion and power.

"Hacky Honey and Lads Of Alnwick, two borders 17th century tunes close the album, delivered with grace and a certain attack, again balancing beautiful playing with an emotional narrative. Kit Hawes and Aaron Catlow play tribute to the past with traditional material and knowledge of past masters, while managing to let their own musical voices shine through.