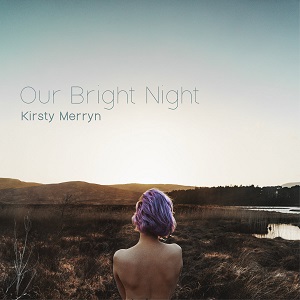 
Since Kirsty Merryn released "She & I" her stock within the UK folk music scene has deservedly continued to rise. So if you don't yet own that album, it' s a work of true quality. I have been looking forward to hearing this new work for some time, because Merryn is a growing force though not a prolific artist, and one who only releases music that is beautifully crafted.

Almost every musician on the planet will tell you that their latest work is their best, and even with the adulation that "She & I" received, "Our Bright Night" definitely is. On first listen, the anticipation grows through the piano introduction to "Twilight", which leads directly into "Banks of the Sweet Primroses". It's one of those moments you have before seeing a new artist play live, one you have keenly wanted to see. Here, you are waiting for the inevitable, stirring, vocal break. The confidence of this work is illustrated by the fact that it is 1 minute 40 seconds before Merryn's astonishing clarity of voice knocks you off your perch (a chair in my case). The production is sublime, and you are hooked.

This album deserves a full listen. It is compelling from start to finish. There are no moments where the stratospheric quality dips, not one. In "Constantine", Merryn returns to the roots of her music with one of the first songs she ever wrote. Here brought into 2020 with co-producer Alec Alex providing silky complementary vocals, it is a statement of rare talent. This song predates "She & I" yet it would have fitted seamlessly into that album just as this. "Mary" lifts the pace, and laments the destruction of landscapes that the artist holds dear against the backdrop of a song of love and courtship: 'I want you to see where the starlings once soared'.

"Our Bright Night" is a stunning as you would expect the title track of a quality album to be. Merryn's voice and shruti box ease you into the song. 'For those who have and those who have not' is the link between its historic subject and the crumbling social support networks of the modern day. When you strip the structure of a song back to a vocal with light accompaniment, the voice absolutely needs the flawlessness that she seems to find with such ease.

I expected "The Deep / The Wild / The Torrent" to be a trilogy of songs, but this is its chorus line. The song is a "celebration of the mysticism and beauty of nature". If it is remotely possible to have a favourite song on an album of this standard, then this would be a candidate for one of mine. It is simply stunning. "Outlandish Knight" is the traditional song that follows, delivering the story of the murder of a handsome stranger by the woman he had enticed from her father's house. It seems she was not the stranger's only intended victim 'for six young girls you've drownded here, a seventh I won't be'.

There is a lovely short moment of silence before the piano introduction to "Little Fox", 'a love song for the anxious', which settles into a gentle rhythm. This song feels like a bridge to the style of "She & I". "Shanklin Chine" is the name of a wooded ravine on the Isle of Wight, and here delivers the story of a woman who receives a ghostly visit from her sailor lover who lost his life in the Napoleonic Wars. Sam Kelly's vocals complement here, voicing the story from the sailor's standpoint.

"The Thieves of Westminster" is a song of power and powerlessness, with a countryman travelling to the capital to try to restore the fortunes he had lost the 'the men in power'. The song builds from its initial vocal to pushing the boundaries of folk rock. It has a really clever structure. I am a big fan of any song that leaves the listener wanting more, because less is almost always more.

"The Wake" is an old favourite of mine and has been around on YouTube for some time. To finally hear the recorded version is one of life's real pleasures. It's another standout moment in an album that will be a fixture in car, studio, attic, and wherever else I may find myself in these extraordinary times. The album concludes with its shortest track, a solo piano piece "Dawn", 'welcoming dawn at the end of a journey'. Just as the album began in the same vein, this is an illustration of Merryn's growing confidence as a musician, and is a calming way to invite a repeat listen to the whole work.

"Our Bright Night" is full of surprises of the best kind: Phil Beer on violin, Sam Kelly on vocals, to name just two. It's a masterful way of providing variety at the right time in the right way on the right song. The musicianship throughout is excellent with Merryn's sublime voice accompanying her piano, shruti and synthesiser, and Alex Alex adding guitar, bass, synthesiser and vocal.

I referred earlier to 'one of those moments you have before seeing a new artist play live, one you have keenly wanted to see'. Kirsty Merryn is such an artist, and I was all set to have that pleasure at Norley Village Hall in Cheshire before the pandemic wreaked its havoc on us all. One day soon!