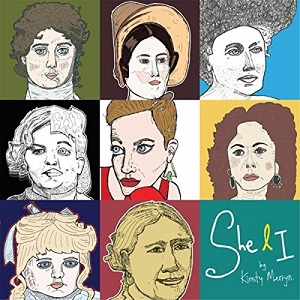 
Sad to say, it’s taken me a while to discover London-based, New-Forest-born singer-songwriter Kirsty – my loss, as it turns out, so let’s make up for that now. She And I is Kirsty’s debut full-length CD; it comes after two stripped-back, toes-in-the-water taster EPs, 2013’s Just The Winter and 2016’s Stories Of Our Time (both of which I’ll be aiming to catch up with pronto, purely on the strength of She And I).

She And I is an eight-track collection of self-penned songs; the majority of these ostensibly share the common theme of focusing on and/or being written from the perspective of (or in the “voice” of) a specific real-life female character from history. OK, so the basic premise has been explored before – for example, most recently, by Louise Jordan in her acclaimed No Petticoats Here project (album and touring show), where she presented a veritable gallery of portraits in song of inspirational ladies – but there’s still loads of potential, with so many ladies throughout history who are unsung heroes, and each with a special personal tale to tell.

Kirsty accompanies herself on piano for five of the eight songs, and it’s not only in that obvious detail that she sometimes – though not by any means always – puts me in mind of Sandy Denny; but in her vocal performance (tone and phrasing) which bears an uncanny resemblance on the disc’s opening song in particular (The Pit And The Pugilist, one exception to the female-protagonist role, on which Kirsty imagines herself as her great-great-grandfather, a miner and boxing champion) as well as (to a lesser extent) on the dramatic Biblical tale of Delilah And Samson (where guest Luke Jackson provides a storming duet-vocal part). Elsewhere, Kirsty’s voice brings somewhat more fleeting resonances of her acknowledged inspirations: Joni Mitchell, Kate Bush, even Cara Dillon perhaps. But for the most part it’s Kirsty’s own individual vocal character that’s in the frame, in tandem with the arresting, intricately detailed production by multi-instrumentalist Gerry Diver, who to my mind brings more than a touch of Lisa Knapp weirdness to the proceedings at times. Especially on much of the supporting instrumental detail, notably elements such as the itchy, scratchy (and scary) percussion backdrop to the funereal chant Bring Up The Bodies (inspired by Jessica Mitford’s book on the American burial system) and The Fair Tea Maker Of Edgware Row (which explores the love triangle, involving Admiral Nelson, into which Emma Hamilton became embroiled).

Then there’s the eerie supernatural drama of An Evening At Home In Spiritual Séance, concerning Georgina Houghton, Victorian maker of “spirit drawings”, backed by a swooning, reverberant slide guitar, which imparts an even more other-worldly aura, and Kirsty’s voice is joined by Steve Knightley on Forfarshire, the dark brooding narrative told by lighthouse-keeper William Darling and his daughter Grace who became a legend when she rescued shipwrecked survivors. The almost jubilant Queen Of The Mist tells of 63-year-old grandmother Annie Edison Taylor who went over Niagara Falls in a barrel. Then, Kirsty’s closing song is a spooky, shuddersome murder ballad The Birds Are Drunk, sung in the voice of the victim herself to a spectral drone and disembodied birdsong; casting deep resonances further afield, this makes a uniquely powerful lasting impression, and may well be the album’s finest moment even among a disc of highpoints.

I feel sure Kirsty has a lot more to say, not least because this album is woefully short at just 28 minutes. Then again, it’s a case of quality over quantity. Keep an eye out for Kirsty, she’s going places!