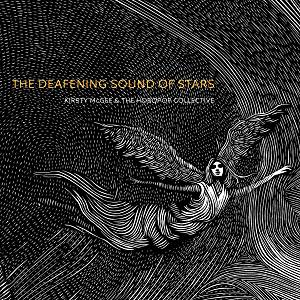 
The Hobopop Collective, a fluid ensemble variously comprising anything up to ten musicians, was first put together just over a decade ago by well-travelled singer-songwriter Kirsty and erstwhile long-term collaborator Mat Martin, to perform music that Kirsty deliberately (and highly aptly) coined "hobopop" - meaning music with no fixed "home" but containing elements of folk, jazz, blues, pop and Americana. In the interim since The Collective's first (and last) studio album Those Old Demons (2014), Kirsty and Mat have separated, but The Deafening Sound Of Stars is if anything an even stronger and more characterful collection for its even greater fluidity, sporting an engagingly sensual demeanour that exudes cool confidence and control.

The Deafening Sound Of Stars is not so much a collection of tracks, more like a kind of thematically linked song cycle, wherein the individual songs concern the unstoppable nature and fateful inevitability of love and one's helplessness in having the affair take its course and consequences. The stylistic variety ensures a continuous interest for the listener while demonstrating Kirsty's intelligent, literate brand of songwriting, not least through a keen and natural avoidance of genre stereotyping. A good number of the songs (e.g. The Glimmer In The Corner Of Your Eye, I Hold You In My Arms, Butterfly Pin) inhabit a distinctly 30s/40s lounge-jazz idiom, often with a persuasive gentle swing, while Raven's Eyes moves more into jazz-noir territory; Mesquite Honey and Copenhagen take finely brushed excursions into dusty desert twang; Greedy Little Things in quite sinister in its exotic scoring and softly-voiced self-doubting admonition and the back-to-basics acoustic setting of Madness And The Moon proves ideally matched to the questioning lyric. The album's title song is a masterly, leisurely, intimately glistening eight-minute rumination on one's search for peace and calm in the midst of the world's (and by implication, our own) emotional turmoil. Hushed delivery and a brilliant control of vocal and instrumental dynamics also characterise the album's lazy closing lullaby Scorpion In A Mason Jar. It's yet another of the album's songs that contains much outstanding and unforgettable imagery, here couched in a really beautiful aura of comfort and affirmation that comes close to replicating the atmosphere of early Leonard Cohen.

Kirsty's signature exquisite, beautifully poised, crystal-clear vocal delivery is given the ideal counterpoint in the precisely defined, jewel-like instrumental backdrops provided by Collective members, who on this occasion include reed specialist Howard Jacobs, Clive Mellor on harmonica, Nick Walters on trumpet, Biff Roxby on brass and cello, Barkley McKay on Hammond, piano, lap steel and dulcitone and Tomás Oliveira on glass harmonica; there's also some particularly imaginative electric guitar playing from Anton Hunter. It's a pleasure, too, to find the album's attractively-illustrated digipack includes full lyrics - although these are in a very small, not easily readable point-size. And I'm a touch confused by the statement in the accompanying press release that there also exists a rather fascinating-sounding "limited edition 'sister' record of field recordings made in Italy last summer", which I'd love to have heard but which wasn't sent to us…

Whatever, this irresistible, "quietly deafening" - and exceedingly compelling - record may well be reckoned Kirsty's finest achievement to date, as well as a serious contender for the year's best-albums list.