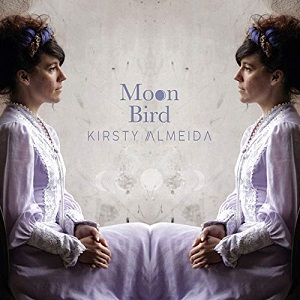 
Those familiar with Manchester's Northern quarter may recall The Wonder Inn, an eclectic organic café and event space that ran for three years within a Grade 2 listed paper mill in Shudehill, before closing in 2017. What they might not know is that the driving force behind The Wonder Inn was a folk singer, raised in Gibraltar, and once signed to Decca Records. Her name is Kirsty Almeida, a songwriter and singer now based in Hebden Bridge, who has released three previous albums, as well as singing with the likes of Glen Tilbrook and Natasha Hamilton of Atomic Kitten.

Those that have seen Almeida perform live in Manchester will remember that, as well as folk, her repertoire also includes jazz, blues and New Orleans soul, and her performances could be quite theatrical, with a variety of props adorning the stage. The result was a cabaret show with a fusion of Tim Burton and Paloma Faith influences. With her silky-smooth vocals and burlesque-style set she created a powerful presence.

Moonbird is Almeida's new collection of self-penned songs, and is released on All Made Up Records, the label that she now co-owns with composer and double bassist Matt Owens. She has performed ,in concert, songs by Nick Drake as well as recording covers by songwriters like Joni Mitchell. Her album for Decca was produced by none other than Youth. This self-produced album, therefore, appears to have a high pedigree to maintain.

And it is undeniably a personal and candid piece of work. Almeida's voice is indeed one of unquestionable beauty - perfect control, and harbouring a just-below-the-surface sense of fire and passion. Her use of a parlor guitar in tracks such as 'You Make My Heart' is a genuine delight as she sings of 'lazy days of elderflower wine'. 'Dance With Me' employs piano and flute to create a gentle mix of mindfulness and romance that is wonderfully uplifting with its dualled aspirations of sanctuary and desire. The ballad of 'Josie Brown', with its story of a young child visiting an old lady is a touching tale of friendship and loss. 'The Stranger' arrives at a poignant balance of regret and hope, and is driven by a strong melody and bewitching harmonies.

The title track adopts a South American rhythm and adds a sense of the exotic, as does the introduction of an African kora during the haunting 'Into The Light'. 'I'm Going To Love You' is possibly the strongest track on this entire collection with a rich and raucous New Orleans flavour, hot brass embellishment and gospel voices. Gentle vocals and strings lead us to the close with the short, but beautifully sweet, 'Ode to a Parlor Guitar'.