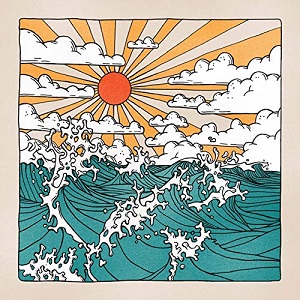 
Based in the US Mid West, Iowa band 'King Of The Tramps' have been plying their trade all across the region for many years now and have released five albums since 2011, including 2018's 'Wild Water which is getting a belated review here!

Of the ten tracks on 'Wild Water', nine are 'King Of The Tramps' originals plus a cover of the R&B classic 'None Of Us Are Free' written by Cynthia Well, Brenda Russell and Barry Mann and famously performed by Ray Charles and Solomon Burke amongst numerous others. For the album, the band are also supplemented by additional musicians adding more guitar, banjo, trumpet, saxophone, piano and Wurlitzer across the songs with it all being recorded at the Old School Studios in Auburn, IA, engineered by Todd Partridge, Adam Brimeyer and Reilly Partridge and Mastered by Rob Arbelo.

Opening and title track 'Wild Water' shuffles in on sharp drums and throbbing bass before Todd Partridge's rough hewn, archetypal country-rock vocal grabs the listener by the throat. His voice may be the icing on the cake but there is so much more to the band than that and the playing here is exemplary, with a sound that conjures up images of the Black Keys, Kings of Leon, the rockier side of Sturgill Simpson and there's also something in the arrangements that, to my ears at least, nods towards the marvellous Alabama Shakes. This is a great album opener indeed.

'Byron's Boogie' is just shambolically wonderful, 'Let It Pour' similarly so but factoring in my favourite vocal from Todd Partridge and some particularly glorious horns, then it's the delightfully hard edged, rollicking early Rolling Stones style rhythm and blues of 'Hard Times'.

Quality maintained, the rest of the album rattles through at a breathless pace until it finally pauses for breath with the last two songs, the dreamily wistful 'Worry' and 'You Alone', all yearning, husky vocals and stately musicianship.

Also worthy of special mention is the bands one cover on the album, 'None Of Us Are Free' and whilst I can't in all honesty say it tops the Solomon Burke version, it is nonetheless rather wonderful, swaggering through at a slick pace and boasting some powerful harmony vocals on the chorus.

I must confess to never having heard of 'King Of The Tramps' before the arrival of this review album but I'm very glad to have made their acquaintance now. 'Wild Water' is chock full of strong songs, all engagingly arranged and superbly played by the tightest of bands who happen to be fronted by a vocalist with a voice to die for.

As if all that wasn't enough, having checked out a lot of the bands gig footage on YouTube I think the only thing that would improve upon this album would be to hear these songs in all their live glory.