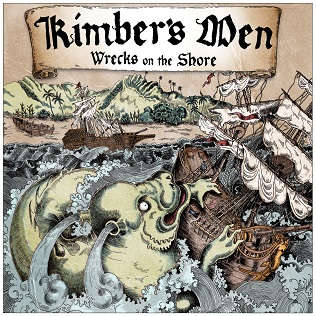 
More than your average Shanty band are Kimber's Men with their latest offering 'Wrecks on the Shore'. Starting with a rousing and belting rendition of 'Bound Down Trinidad' a staple tale in the aural tradition of a lady who was 'favourable' with the sailors.

Throughout the first half of the album Kimber's Men take you on a geographical onslaught over the waves from Trinidad, North West England, Australia, Canada to name a few, solidifying Kimber's Men's international outlook on their repertoire. 'Frobisher Bay' is not your typical shanty, rather a lament on Whaling which sounds more like a hymn which culminates in the death 'frozen in this lonely grave' of the whaler.

'Here's a Tender Coming' one of the standout tracks on the album. Regarding the Press Gangs during the height of the Napoleonic Wars, a North East song with a beautiful addition of Border Pipes shows Kimber's Men in full flight with instrumentation.

Not sticking strictly to your typical British shanties, 'Going Back to Weldon' is something of a welcome surprise on this album. The American shanty gets its own airing and rendition which has something of Blues/Gospel flavour quickly followed with another American song 'Shawnee Town' about trading along the Ohio river. There are some excellent Bluegrass versions out there, Kimber's Men choosing to keep this very stripped down a capella rendition.

As aforementioned, Kimber's Men are not your average Shanty band. Whilst their staple may be rousing a capella shanties with fierce harmonies, they are not averse to mixing things up with instrumentation and tackling lesser sailed waters for their repertoire. A surprising final farewell is a secret track of 'Leave Her Johnny, Leave Her' leaving us with a filthy version of this song and a definite smile on your face

Leave Her, Johnny, Leave Her