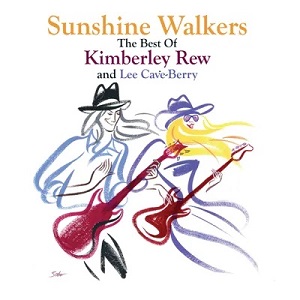 
While making his music debut as part of The Soft Boys, the cult late 70s Cambridge neo-psychedelia outfit fronted by Robyn Hitchcock, as the title of the compilation echoes, Rew is probably best known, however, as the writer of 'Walking On Sunshine', an international hit in 1985 for Katrina & The Waves, for whom he played guitar, the band that, 12 years later, would go on to win Eurovision with 'Love Shine A Light', another Rew composition. Neither of those, nor 'Going Down To Liverpool', which was a hit for The Bangles, are on this lengthy collection, the material all being drawn from seven of his twelve solo albums, a Troggs tribute with wife Lee-Berry (who's played on all his albums save his 1982 solo debut), two from her 2003 solo album Spring Forward, a couple from their first joint original material release, Enjoy The Rest Of Your Day (they also have two covers albums and one from a Bongo Beat compilation.

It opens with Chuck Berry-emulating 'The Dog Song' from Miles of Smiles, a song (inspired by watching a TV show with a canine obstacle course) and an album title that pretty much sums up the sort of music they make, bouncy, feelgood Transatlantic pop with the occasional undercurrent of social commentary bubbling beneath whimsy. Given a review could be summed up by the chugging new wave 'It Makes Me Happy' off Spring Forward, it's not an album that requires to be picked apart for lyrical and musical agendas and influence, but one to be slapped into the player whenever you want a dose of exuberance in your day.

That said, those unfamiliar with Rew's catalogue should be directed to the jovial barroom piano jauntiness of the Ray Davies-styled 'Bloody Old England', the girl group doo wop of Cave-Berry's 'Backing Singer Blues', 'End Of Our Rainbow', which is a kissing cousin of 'Ob-La-Di, Ob-La-Da', and the effervescent tumbling Dave Edmundsy 'English Road'. And that's just the first six tracks.

Elsewhere, there's shining nuggets with the accordion coloured ballad 'The Safest Place', the funky pop drive of 'Some Days You Eat The Bear', the calypsoish nonsense 'Purple Pyjamas' and three gems from 1982's The Bible of Bop, the Beatlesy rocking 'My Baby Does Her Hairdo Long', the cascading folk rock 'Hey War Pig' and the new wave pop 'Stomping All Over The World', variously featuring The Soft Boys and Katrina & The Waves line-ups alongside Peter Holsapple and Mitch Easter.

'I Want You' comes from the Troggs tribute (which you really should hear in full) and 'Restless Ocean' is a rarity off the 2002 compilation Driving In The Rain:3AM - Songs To Get Lost With, the collection here culminating with the chiming guitar of 'Simple Pleasures', a song born from the pair first getting together in the 90s, but also yet another perfect summation of the music herein.