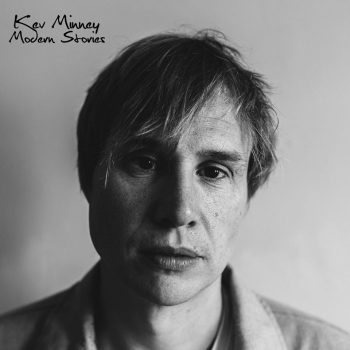 
Kev Minney is a singer-songwriter and guitarist based in Brighton. It's a couple of years since he released his last album. For 2020 comes a collection of songs brought together under the title "Modern Stories".

The album opens with "Magic", a wistful song that alternates between a twitchy, rather unsettling rhythm picked on the guitar, and a smoother more dreamy soundscape. The instrumentation on this track is really beautiful - something that will be a theme of this album.

Moving on to "Strangers" - a good example of Minney's skill at constructing unusual architecture for his songs. A lightly picked guitar throughout the song is reinforced by strings, piano and some sweet backing vocals on a lovely catchy refrain.

This combination of Minney's acoustic guitar, inventive song structure and carefully arranged instrumentation is one of the strongest aspects of this album. The instrumental playing is top notch throughout. Kev is a superb, subtle and inventive finger-picking guitarist, and the string arrangements are gorgeous. Little touches here and there of other sounds and instruments keep each track surprising and interesting. There are one or two moments where I think Kev's vocals get a little lost in the mix, but for the most part it is very satisfying to hear the layers of instrumentation building and punctuating the sound.

Kev has a soft, warm, melodic voice which is very easy on the ear. However, I felt that sometimes there could have been more variety in the tone of vocals - which doesn't vary much whether Kev is singing about feeling tired at the end of the day, or global ecological catastrophe. This might have led to a saminess of tone through the album that is avoided by the clever and sophisticated arrangements.

As the album progresses, the reason for the album title becomes more clear. These are songs that concern many aspects of the difficulties faced by many in the modern world, from the very intimate and personal ("Feeling Fine", "Good Friends") to more social and global issues ("Borrow More", "Natural Disaster").

One musical highlight for me is "Natural Disaster", co-written with Steph Brown. The urgent and unsettling guitar picking provides the backing for some beautifully harmonised vocals with Kev's and Steph's voices swirling around each other in a fascinating way.

The album ends with "All That I Need", a gentle, sensitive song that slowly builds to the final question: "Where do I go?" A poignant end to an album full of delicate beauty and vulnerable anxiety.