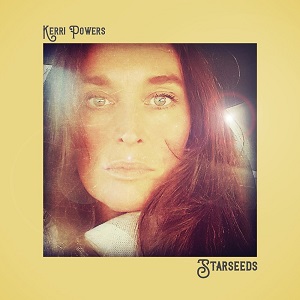 
Hailing from New England, Powers is a strikingly sandpapery voiced singer-songwriter and slide guitarist whose music hews to both the blues and American folk. I’ve not come across her before, but that’s not too surprising given this is only her second full-length release and comes 17 years after her debut with only an EP in-between.

It opens with ‘Peeping Tom’, an acoustic goodtime blues number which summons the legend of Lady Godiva’s naked ride except here, in a metaphor about modern relationships between men and women, sees the titular Tom’s gaze “turned away/To a caravan of nightingales/All those women dancing wild.” ‘Somewhere On The Vine’ is more of a backwoods folksy Americana persuasion with keening pedal steel, but then it’s back to the blues with some gutsy slide work on ‘Bicycle Man’.

While never straying far from her basic musical template, she keeps the variety sharp, ‘Mine The River’ a swampy Creedence-like choogle, the slide riffing and circling electric guitar notes Grace and Harmony and the lazy swagger of ‘Moon n Stars’ showcasing her blues power while, in contrast, ‘Free Bird Flying’ is a dreamy slow country waltz accompanied my marxophone.

The balance extends to her choice of covers too, Gene Clark and Doug Dillard’s wistful cosmic country strummed ‘Polly’ set against an album closer acoustic version of Blind Faith’s ‘Can’t Find My Way Home’ that informs it with melancholic shadows. She’s been likened to Bonnie Raitt and while I wouldn’t extend the comparisons that far, anyone into her music or that southern blues and country vibe won’t be disappointed.