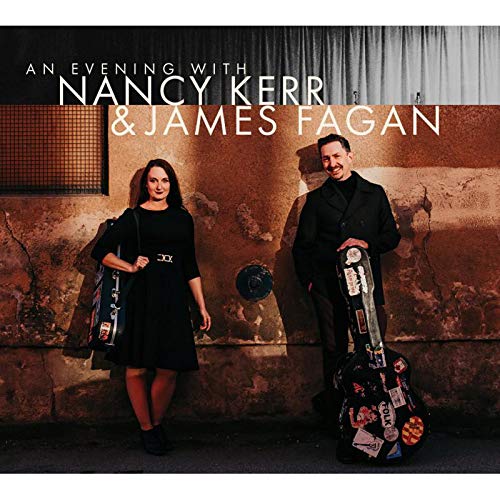 
What it says on the lid, this return to the recording scene as a duo after an absence of eight years raising family and various side and solo projects finds them playing to their strengths with a live album recorded over two nights in Kimpton, Herefordshire, and Sheffield.

As such it naturally reaches into their back catalogue for some of the most requested songs from the previous five albums as well as including several never previously recorded pieces from the live shows alongside three all new Kerr compositions. It's one such that launches the set, Broadside emerging from Kerr's interplay with Martin Simpson and John Smith during The Elizabethan Sessions, loosely centred around a a meeting between Irish Pirate Queen Grace O'Malley and Elizabeth I, this revisiting giving it a rousingly friskier treatment. Another rework, this time from Kerr's Instar album, is to be found with 'Fragile Water', an intimately fingerpicked Celtic-coloured number about gender identity.

Originally featured on their last album, Twice Reflected Sun, the fiddle-heavy 'I Am The Fox', a foxhunting number sung by Fagan and written by Kerr from the fox's perspective that envisions a time when he and the hounds will be brothers (so clearly also metaphorical) precedes the first of the instrumentals, the 'Kitchen Dance' set sandwiching a piece by Fagan's sister between two fiddle tunes from Macedonia.

A folk evergreen, 'Barbara Allen' appears in the Hampshire version as sung by the renowned late Gypsy songstress 'Queen' Caroline Hughes and is in turn followed by another staple, the duo's first recording of 'The Waters of Clyde', written by the late Glasgow-born Australian Jimmy Gregory and sung by Fagan.

And, on things Antipodean, alongside a splicing of the traditional Northumbrian pipe air 'Sir John Fenwick' with Will Taylor's fiddle tunes 'Nancy Taylor's' and 'The Pearl Wedding', the album also features a third three-part instrumental set with the self-descriptively titled 'Australian Waltze's. Still nodding to Fagan's upbringing down under, both with his vocals to the fore, set to music by Gerry Hallom, 'The Outside Track' was written by Australian bush poet Henry Lawson about sailors bidding last farewells to a shipmate as they sail off into new futures, while, opening on acapella harmonies, the six-minute 'Anderson's Coast', a longtime live favourite written by John Warner about the impacts of convict transportation.

Fagan also sings lead on 'The Turtle Dove', the first song he learned from Kerr and featured on their debut duo album, 1997's Starry Gazy Pie, and 'The Herald of Free Enterprise', Robb Johnson's powerful account of the Zeebrugge ferry disaster of 1987, rendered all the more so by the soaring finale of chorus voices combined from the five hundred people who came to the shows.

It's followed by a new Kerr song, 'Lovers of Us All', an anthemically strummed sly reflection on the growing #MeToo movement that knowingly echoes the tune to 'World Turned Upside Down', the collection closing with another live favourite, the traditional Northumberland shanty 'Dance To Your Daddy' breathlessly sung and challengingly interwined with Kerr's complex fiddle tune 'The Flaming Drones', and, finally, one last new number, 'Mr. Weather', a playful singalong friendly ditty about those who protect the trees on Sheffield's streets inspired by their children's habit of giving them all names.

Their performing partnership has been in mothballs for far too long, so this is a very welcome return, one which, hopefully, will also see them back in the studio together before too long.