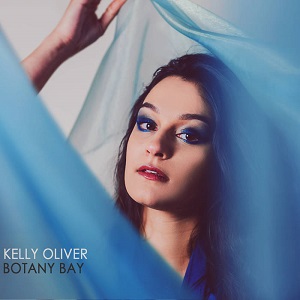 
Traditional songs only become traditional because they survived long enough to be collected; the ones that were no good never made it that far so there's an automatic built-in quality system. However, that doesn't mean they didn't change or get added to by different people at different times because that's part of the oral tradition and Kelly Oliver, I'm pleased to say, is maintaining that approach.

Kelly's third album "Botany Bay" consists solely of traditional songs and she set herself a further challenge by only including those collected in her home county of Hertfordshire. That also happens to be where I'm from, so it makes the album doubly interesting. Many view the county, these days, as nothing more than a giant dormitory for London commuters but it has a rich history and this album deserves to become a part of that. Kelly also has the advantage of being a highly regarded singer / songwriter so she isn't just content to lift songs from the collectors manuscripts; she bring her own considerable talents to bear and makes these old songs relevant to today in both message and style.

However, the songs stay firmly in the folk tradition so there's enough misery death and general smuttiness to keep everybody happy - apart from the characters in the songs, obviously. The album opens, and sets the scene, with "The Miser and His Daughter" which is grist to any folk mill. A father doesn't approve of his daughter's choice of boyfriend so pays to have him shanghied. The daughter finds out and tries to buy off the captain employed for the task but he won't cheat on her father. The daughter goes home to mourn her lost and probably fade away.

Also of interest to any folkie the album includes a version of "The Trees They Do Grow High" (Roud 31). This song has so many versions that at some stage must have been popular across the country, indeed the English speaking world. It's a tale of a woman forced in to marriage to a much younger man. Surprisingly she falls in love with him, has a child and watches him die all before he's eighteen. It must have been something people were familiar with when marriage was as much about political liaisons as romantic ones.

The smut is provided by "Cuckoo's Nest" (Roud 1506) and even though Kelly has changed the lyrics to make it less misogynistic there's still enough to make a Carry On scriptwriter blush. Thankfully the chorus has remained intact
'Some like a girl who is pretty in the face,
And some like a girl who is slender in the waist.
But give me a girl that will wriggle and will twist:
At the bottom of the belly lies the cuckoo's nest.'

The delight of traditional songs is that they aren't from the great halls and drawing rooms, but below stairs and in the taverns but Kelly does well with this one in keeping it simple and singing with a certain amount of innocence in her voice rather than just making it a bar room bellow as many might be tempted to do. That reserve also changes the tone of the song as the girl is far more worried about straying than the man, for obvious reasons as we see later.

The album closes with a song that shows thesespotentially different outcomes of liaisons for men and women. "Died of Love" (Roud 60), and a spoiler alert if ever there was one, is a version of a song some may know better as "A Brisk Young Man". It's the age old story of yet another girl who is wooed and deserted, only to find herself pregnant and longing for death to release her.

'I wish my little babe was born,
Sat smiling on her Daddy's knee
And I myself in a bed of clay,
With the green green grass growing over me.'

Interestingly, and a part of the social history of Britain that exists to this day, many of these songs might have been collected in Hertfordshire but they have their origins in Scotland or the north of England. The longest continuous road in Britain connects London and Edinburgh and is designated as the A1, but still called the Great North Road. It passes through Hertfordshire, actually very close to where Kelly comes from, so I wonder if they arrived in the county as workers made their way to London and literally sang for their supper to fund the journey south.

As a unbiased reviewer I have to say I took to this album from the very first hearing. Kelly is one of the brightest lights on the modern folk scene and she's brought all of that dazzle to these songs. As we know from her previous work there's a strong sense of social justice in her work but she can combine that with a style, as with singles such as "Jericho" and "Rio", that crosses into the mainstream. These songs sound fresh and vibrant, and yet are undoubtedly folk, so will hopefully reach a wide audience; there's enough to keep the traditionalists happy and new audiences will like the sound. The musicianship on the album is of the highest quality with a list of backing musicians that reads like a 'who's who' including Phil Beer, Lukas Drinkwater, Luke Jackson and Stu Hannah, who also produced it. For the purists the sleeve notes also include who collected the song, when and who from.

The album is now available for pre-order through Bandcamp, with a release date of 28th September. There's also a country wide tour and the official launch show is appropriately at Cecil Sharp House in London on the 10th October.