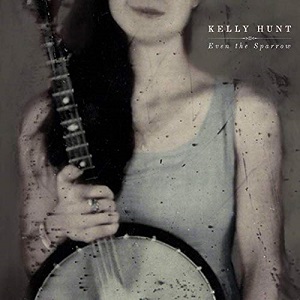 
Kelly's a Memphis-born, now Kansas City-based songwriter with an acute sense of personal heritage and inheritance, who places great value on her chosen instrument of accompaniment. This is a mysterious, genuinely vintage (Depression-era) calfskin tenor banjo with a distinctively mellow tone that coheres amazingly well with Kelly's singing voice, a distinctive instrument in its own right that displays a fetching combination of expressive delicacy and florid embellishment. Her banjo playing style is imaginative and very much her own, improvised from a combination of old-time picking and primal percussiveness (the latter most strongly in evidence on Delta Blues). Vocally, Kelly can shift between intimate conversational and gritty defiance during the course of just one song (as on Back To Dixie) - and yet I find myself even more impressed by her gentler, more plaintive shadings on songs like the haunted Nothin' On My Mind and album standout Men Of Blue And Grey. This latter song is a Reconstruction-era ballad about the repurposing of some Civil War glass plate negatives in a greenhouse roof, which becomes "a meditation on the hope that growth and life may one day be able to emerge from the ruins of suffering". I've taken that story outline from Kelly's website, which helpfully gives background and explanation for a few more of the songs on the album too, and proves a good illustration of the intelligent and thoughtful use of narrative and analogy that characterises Kelly's songwriting.

On the other hand, Kelly may sometimes borrow titles and phrases from traditional American music - we encounter songs called O Brother Where Art Thou? and Gloryland for instance, but these are based on original thought-streams and ideas, not imitative or derivative in any respect. And similarly, lead track Across The Great Divide - that's not the famous Kate Wolf number of course, but a powerful Kelly Hunt original that "turns an otherwise traditional accounting of spurned love into a philosophical epic of the ethics of forgiveness and freedom" - and this song is another of the album's highlights for sure.

Kelly's grasp of melody is accomplished but not in any way "obvious", in that the majority of songs don't progress in quite the way you expect (not at all a bad thing); Fingernail Moon is perhaps the only song to stretch its chord sequence a touch too far. As far as her vocal delivery goes, Kelly's is exquisite, with excellent clarity of enunciation and an enviable deftness of dynamic control (although having said that, I'd still have appreciated getting a lyric sheet with the album …).

The spare, tautly controlled musical settings (configured by Kelly with co-producer Sta? Heaney) give Kelly's songs due room to breathe; for much of the time, all you'll hear is Kelly's banjo supported by only Sta?'s fiddle or upright bass and possibly Tyler Giles' guitar or pedal steel, although the sound opens out jubilantly for the Dixieland-style gospel of Gloryland, a rousing album finale.