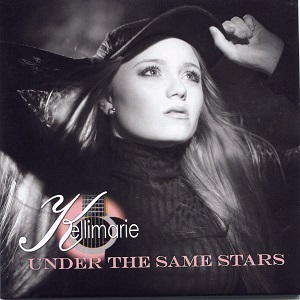 
"Sometimes I feel like giving in, but that would be quitting before we begin." If any sentence encompasses just how hard it can be to achieve any personal target it is these words. For these words to spill out of the mouth of a fourteen year old trying to make it in the music industry makes it doubly telling. The quote is a line from "Under The Same Stars" the title track of a debut EP written and performed by Kellimarie Willis who is currently taking part in the second series of "Got what it takes?" being aired on CBBC. The subject matter is the other contestants on the show. As the show progressed, the kids formed friendships which will last a lifetime. This inspired Kellimarie to write about her experiences and recalls the moments of doubt that occurred during the production of the show and how each of them encouraged and supported the others at moments of a potential crisis of confidence. Thus friendships came about. "Under the same stars" is the most thoughtful and contemplative track on the EP and the tempo reflects that. "You gave me someone to call a good friend. Remember I love you no matter where you are" becomes an indication just how well the kids bonded. Kellimarie accompanies herself on this track with acoustic guitar.

With a talented band behind her for the remainder of the tracks she gets a bit more up tempo. "You Without Me" illustrates the hole that can appear if a friend disappears. "I'm missing something now you're not around." This song contains a number of similes, Lock without a key, fish without some water, boat without a sail, even mattress without a pillow. They go on and on each time you listen to the track you spot another one. I was very impressed with this track for the lyrical tricks she uses and whilst it is essentially a sad song, it is surprisingly danceable.

"You're not mine" has a similar dichotomy, a driving beat but story of loss, it also contains a large number of lyric similes. The fourteen year old has written around thirty songs and has been playing the guitar since she was eight. The maturity of this girl's lyrics completely belie her age. On this track she sings both lead and backing. I saw her performing this track live and the backing part was taken by one of the members of her band, but listening to the recorded track it demonstrates what a superb voice she has.

A defiant "Better On My Own" completes the quartet of songs, all self penned, essentially, you've gone and I'm better without you. the lines "You're just a heart breaker, you're just a risk taker, you deserve what you get." Masks the sadness of the breakup with bravado. The only incongruous note is the sudden ending of this track it just sort of stops, where all the other tracks have what might be termed "proper" endings. However, listen to this EP and wonder at the development of a talent so young and yet mature. If you are searching for her watch the spelling there is no "e" in the middle of her name.

During the course of writing this review, I have played this EP over and over and I have to say I didn't tire of listening once, indeed I have got to love it. The next milestone for Kellimarie is to win a place on the main stage at BBC 1's Big Music Weekend in Hull at the end of May, She has to win "Got what it takes?" for that to happen. By the time you read this, we will know if she has succeeded.

Better On My Own