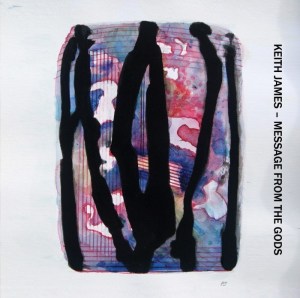 
After over 40 years, 13 albums and upwards of 100 live shows annually, 2017's collaboration with renowned producer and sound artist Branwen Munn for 'Tenderness Claws' and 2018's career retrospective 'Captured - The Best Of Keith James', might reasonably have been followed by a bit of an artistic breather for Keith. No sign of that though as 2019's 'Message From The Gods' makes it a breathless three albums in three years. With an enviable reputation as the interpretor in chief of songs from Nick Drake, Leonard Cohen and John Martyn, as well as being a songwriter of renown in his own right, over the past few years the setting of poetry to music has also become part of Keith's staple fayre. In a natural next step, this album presents ten new songs transcribed from the writings of Maya Angelou, Pablo Neruda, Frida Kahlo, Kate Tempest, Khalil Gibran, WH Auden, Federico Garcia Lorca and Leonard Cohen.

For 'Message From The Gods' Keith is reunited with Branwen Munn and shares production duties with her and Dave Wood, with Dave doing the majority of the recording and Branwen mixing and mastering the tracks to CD.

Opening track 'Tiresias' is the first of two songs using the words of Kate Tempest and enters on languid percussion, guitar and slide with Keith's sweetly husky vocal sitting tight on top of the mix. I love how the track takes off at around two minutes forty into an almost Indian Sitar sounding section before settling back into itself, and also worthy of note is Keith's ability to somehow get these words of Kate Tempest's to scan in song form, when on paper they seem evocative and striking but without obvious structure or temper.

'You Are The One' is from a poem by Frida Kahlo and here feels very much like a declaration of love song and features a sympathetic, yearning vocal from Keith and some particularly sweet harmony vocals.

'All My News' is taken from Leonard Cohen's poetry collection, Book of Longing, and features an acoustic picked intro which is rather pleasingly reminiscent of 'House of the Rising Sun' and a reflective, almost detached, vocal from Keith which allows the verse to take centre stage before the advent of more beautiful harmony vocals and violin that ushers the track into more intimate territory.

'Quartet' takes lines from Khalil Gibran and sets them to an insistent, pushy acoustic riff and strong rhythm track whilst 'Caged Bird' features the first of two works from Maya Angelou and is a suitably reflective piece delivered with more delightful harmonies and a haunting cello underpinning.

The second piece from Kate Tempest 'The Things I know' is another strongly percussive affair with beautifully spare instrumentation that layers deceptively as Keith half sings half speaks pithy lines such as "Taking things for granted is a terrible disease, we should all check ourselves regularly for signs of it".

'If You Forget Me' is taken from the verse of Pablo Neruda and is as reflective as the title suggests whilst the second offering from May Angelou, 'Alone', is given a bit of a working over with an archetypal blues treatment, laid back vocal, slide guitar and atmospheric wheezing, ghostly voices in the backing track.

Keith has already put many Federico Garcia Lorca poems to music and he is on familiar territory with his work 'Weeping Guitar' as his precise playing sets a suspenseful backdrop for the gentle vocal and then WH Auden has the last word with 'But I Can't' which just fits perfectly with Keith's subtle vocal, the understated brushed drums and beautiful strings.

As is to be expected by now with Keith James and his associates, especially Branwen Munn, the playing, arrangements and recording values are sublime. However, not all work that is to be admired and respected is necessarily enjoyed, and an exercise such as this album carries that inherent risk. Fortunately, to my ears at least, these ten tracks stand strongly as songs in their own right with nothing feeling false, constrained, self conscious or compromised. Quite the opposite in fact, effortlessly beautiful.

So, with 'Message From The Gods' the silver streak of Keith James continues, a fine album indeed.