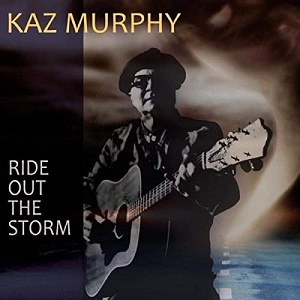 
That Ride Out The Storm, Americana singer-songwriter Kaz Murphy's 4th solo CD, should appear more than a decade after his 3rd, 2007 release, will probably come as no surprise to those who are aware of his back-story.

A drummer and lead singer at the tender age of 10, his long and varied career has included coffee house musician, published author of poems and short stories, percussionist for poet Allen Ginsberg¸ an author of musicals, leader of a folky new wave band, Mad Mad Nomad, writer of instrumental music for film and television, all undertaken whilst undertaking a somewhat nomadic life-style that has seen him work across the US and Europe.

The 11 songs presented here are all self-penned originals, ostensibly rooted in Americana but with Tex-Mex, folk, Country & Western and bluegrass undertones. Recorded at The Zone in Dripping Springs, Texas, and produced by Scrappy Jud Newcomb, who has also worked previously with the likes of Slaid Cleaves and Patty Griffin, musicians of the calibre of drummer/engineer Pat Manske, (Flatlanders, Dixie Chicks, Los Lonely Boys), Jon Notarthomas, guitars, bass and vocals and Penny Jo Pullus, vocals, alongside contributions from Newcomb too, provide a symbiotic backing to Kaz's catchy melodies and narrative-rich lyrics.

With mandolin and baritone guitars oft to the fore, the somewhat edgy, if entirely plausible, stories and scenarios explored are delivered in an assured, confident manner by Murphy, whose distinctive baritone voice soulfully negotiates a path along a journey of the human condition which ultimately aspires to truth, compassion and redemption.

Opening track, When People Come Together, cuts straight to the chase in this regard. The inherent plea for unity
'When people come together
Gonna ride out the storm'
could equally be a literal allusion to dustbowl-era America or a metaphorical call for solidarity

The pulsating blues song, A Sunny Day, is a paean to a hero, Johnny Cash, with lyrical references to the Man in Black aplenty, whilst the slower-paced Blue Devil Sky recounts a family break-up, as
'There's momma in the back yard
Staring up at the sky' ...
'My daddies gone and run off who knows where to this time
and she don't know if we'll have food again tonight for the supper table'

There is no doubt that Murphy's voice is a thing of great beauty, capable of gentle delicacy, as on the gentle Thunderhead, sonorous, as with Soft Heart, a song in which the virtuosity of musicians rerally shines through, or delightfully spacious, as on Where You Come From, a song inspired by a book written by Karen Fisher.

Sonically, the more personal AlI I Wanna Do Is Work recalls, in its verses, Crash Test Dummies, but then vocal harmonies in the chorus sound like the aural-offspring of an Orioles/Jimmy Dean union, wonderful stuff.
Contrasting subjects, and styles, give futher evidence as to the high level of song-writing skill prevalent throughout this album, as the up-tempo, buoyant Somebody Could Be Me explores the possibility of reconciliation with a former lover, whilst the following track, Stella Rae, ruminates on addiction
'All she neeeds is one more score
a reason to live for'

Penultimate track, Forget About The World Tonight, is a slow-paced, laidback, country-leaning song that makes for easy listening, in keeping with the lyrics which urge
'Leave the world outside to spin all alone
And we'll forget about the world just for the night
Forget all our crazy troubles
Forget our worries
Forget our frights'
whilst the album closes with the upbeat Rise Me Up which features a gospel-tinged chorus

Whilst he is not creating a musical blue-print with this album, Murphy is clearly following his own internal compass and over the course of the 11 tracks succeeds in delivering a collection which evidences song-writing of great perspicacity and musicality.

When People Come Together