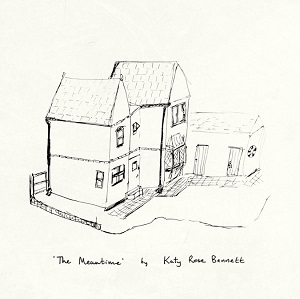 
Described as an album written during a point when her life was in flux, other than saying the songs (all written in the house sketched on the cover) evolve round themes of parenthood, separation and self-acceptance that's as much personal information as is on offer, even the album's launch show affording no further insight other than that two of the songs are about her five-year-old son.

You can read guessingly autobiographical aspects into the lyrics, but the point is that the emotions expressed here embrace the universality of relationships. The follow-up to the Birmingham-themed Songs of the River Rea, this is very much a one-woman show, recorded live in mostly first takes with just her on guitar or a piano and no overdubs, opening with the delicately fingerpicked 'I Have A Song', co-written with her cousin, Lucy Minford, the first lines being about "staring into nothing…living, half living" and "dark matter stuck in my throat", her guitar locked in its case. The imagery suggests it addresses depression, but, as per the title, it's about emerging from the pressure of the mental magma to sing away the demons.

Turning to piano, striking almost a chapel hymnal note, the poignantly lovely 'Did You See' greets the dawn after a dark night of the soul and sings of "the hardest, hardest thing I've ever had to do", of the uniformed judgement of others over the making of difficult personal choices. Moving from morning to the evening before, the waltzing lullaby 'Kiss You Goodnight' could be the lament of any working musician, or indeed anyone whose work takes them away from home, the lyrics comprising only the lines "I kiss you goodnight my love, I hold you and tell you I love you, but when you wake up in the morning I'll be gone" and a wordless da de da chorus. As such, that rather naturally leads to 'Hey Diddle-i-Doe', a playfully strummed mid-tempo pastoral jazzy-folk number about not keeping on going when things don't turn out the way you'd hoped, following the path up out of the underworld as she notes "nothing good will come from jealousy".

Mindfulness and her work as a choir leader with dementia sufferers are at the heart of the poignant, soft sung slow waltzing, old time country-coloured 'The Day Before Tomorrow, about living in the present, to "rise in the morn like a child newly born and lament as the shadows grow on the only day I know" and resolve to be "gentle and kind to this half-shattered mind and try my best just to be".

Her son provides the impetus for the next two songs, 'Shoulders and Boots' moving from the fears of impending motherhood as a gay parent and of not being up to the task to the joyous image of carrying him on her shoulders "as we march right up to the top of the hill and wend our way down through the woods, I know exactly who I am". Then comes te brief piano-backed 'First Day', a simple song that, no more, no less, encapsulates very parent's worries about their child's first day at school.

Remaining at piano, she returns to themes of rising above doubts, anxieties and feeling down through painful memories for the solstice set 'Hold On', an inspirational song of encouragement "for everyone who finds this time of year reminds them of all the ones they love no longer here" and that "the darkest night has been and gone".

It ends, still on a circling piano pattern, with the playful, semi-improvised 'RoundThe Bend', bringing things to a conclusion that change may be be painful but can also be positive as the year draws to a close and an unknown future looms in the repeated and gatheringly jubilant, bluesily sung self-discovery mantra "I found something that I didn't know I'd lost!"climaxing in a crashing crescendo of notes.

The dictionary definition of meantime is the intervening period between two events, or from now until something else happens, as in the emptiness in your musical life between not having and having a copy of this album.