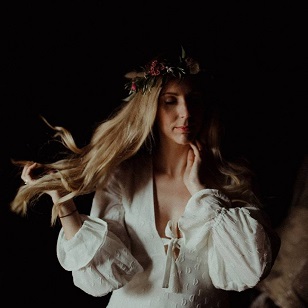 
Looking most ethereal on the cover, one of those with nothing to spoil the image, no artist name or title. Almost saying that's unimportant - it's all about the music. When Led Zep tried it back in 1971, it caused uproar but these are modern times. And they also say a change is as good as a rest which is quite apt to quote here as Katie Doherty emerges in a different form from her 2007 debut 'Bridges' that marked her as a singer songwriter to watch. Rubbing shoulders with Radio 2 and some of the major folk players collided with stage and theatre commitments and put a temporary pause on her progress.

However, she's back with an album that not surprisingly takes the concept of change as much of its theme. Seasons, life changes, the passing of time and inevitably shifting social attitudes and behaviour are all addressed. All without a mention of the words Trump and Brexit.

Her own piano, sansula and vocals are joined in the core line up by Shona Mooney on fiddle and Dave Gray on melodeon, with assorted embellishments, most notably on 'Navigator' where the added percussion, cello and vocals (stand up Will Hammond, Mark Carroll, Andrew Cadie and Mark Bloomer). The feeling of warmth that mixes with a melodic sense (not poppy catchy by any means) takes a shift as 'Rose In Winter' suggests and delivers that hint of delicacy and fragility as "comes the snow" amidst a stark musical framework followed by the chilling dance of 'Polska' and gives a flavour of seasonal change - you can almost feel the snap in the air. The funky drive of 'Angry Daughter' and the fuller production and band sound on 'Navigator' provide a more up tempo change of pace while a more nostalgic and melancholy air is evident in 'Heartbeat Ballroom'.

Ultimately, 'And Then' is timely interval, a brief moment of respite, an oasis of tranquillity in a world where Katie recognises "the pressure to live up to expectation and to portray "perfect. She talks of the killing of creativity and imagination, yet thankfully, there are those in the world who have the foresight to take stock and recognise what's important. Not a bad philosphy for teh challenges thrown up by a new year.