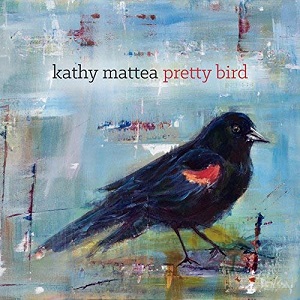 
Kathy's been silent on the recording front since 2012's acclaimed album Follow Me Home, for a very good reason: that upon entering her 50s, she found herself with a change in her voice producing frustrating glitches, at a time of life challenges that taken together gave rise to a period of acute personal anguish and professional uncertainty. And tremendous perseverance and fortitude on Kathy's part. Only a couple of years ago, on emerging from the darkness, was Kathy able to contemplate recording again; this she managed to achieve with the help of Tim O'Brien, and the result is a considered collection of tender and poignant covers that celebrates the renaissance of Kathy's voice allied to a new kind of emotional confidence. This is perhaps not immediately apparent in any heart-on-a-sleeve sense, for Kathy's voice is now lower, earthier and more subtly shaded - quite different to its previous incarnation, most especially in terms of timbre - and gives an impression of understatement of feeling that's born of an acceptance of life's pains and aches. This is expressed in a sense of detachment that at times borders on the numb, much as though Kathy's reflecting on the experiences from the "other side" (or outside) rather than reliving them. This is not necessarily a bad thing, nor a criticism - it's just different from what you might be expecting - and Kathy and her team are to be congratulated for taking her vision of these songs through to this stage.

At first, this new collection of material might seem a touch disparate and not specially unified, but as the disc progresses a kind of thread emerges, of emotion and pain commented upon rather than directly recollected. That kind of stance doesn't automatically prove itself to suit all 12 selections, although there are no outright mismatches. The album's standout moments come at its close, with the Martha Carson gospeller I Can't Stand Up All Alone brilliantly succeeded by Kathy's passionate, quietly stunning a cappella account of Hazel Dickens' Pretty Bird, fittingly the album's title track. Elsewhere, the most successful tracks to my mind are Kathy's takes on Dougie Maclean's reassuring This Love Will Carry, Peter Mayer's soulful Holy Now, Joan Osborne's admonitory St. Teresa, Mary Gauthier's plaintive Mercy Now and the traditional He Moves Through The Fair. That sense of resigned detachment surfaces first in Kathy's rendition of Bobbie Gentry's enigmatic commentary Ode To Billie Joe, but by the time of Tell Me What You Ache For, she seems to have regained something more of the yearning feeling this song demands. Several of the album's songs were completely new to me too, for instance October Song (not the Robin Williamson classic but one of two selections penned by Jon Vezner) and for me its weakest track, Oliver Wood's lightweight Chocolate On My Tongue, which opens the disc.

The stripped-down delicacy and refreshing restraint of the instrumental accompaniments is thoroughly commendable, proving an ideal foil for Kathy's "new" voice, of which producer Tim O'Brien has clearly got the measure. And his hand-picked support crew, which includes able sessioners Charlie McCoy, Victor Krauss, Dennis Crouch, Dan Dugmore, Bill Cooley and Jim Brock, really can't be faulted in any way.