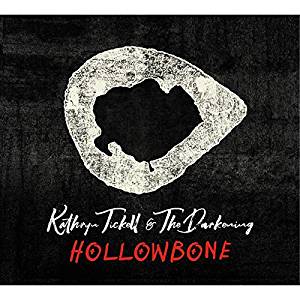 
Over her impressively long career thus far, the big constant in Kathryn’s musical vision has been her all-consuming pride in her north-eastern heritage, at the service of which she’s placed her exceptional musicianship, her instrumental virtuosity and versatility. For many years, the distinctive sounds of her Northumbrian pipes and fiddle have for many been emblematic of the region’s tradition, and to date (over the past 35 years) she’s released 15 albums that have explored the music and its relation to the region’s unique landscapes both through solo performance and through ambitious collaborations with all manner of ensembles, also working in various permutations involving older traditional musicians and upcoming younger performers. She’s an achiever – and little wonder that she’s won so many awards – and I feel sure another will be on the cards for Hollowbone.

Hollowbone is a stunning musical experience by any standards. The point is, even if you think you know what’s coming with a new Kathryn Tickell album, she’ll always confound – and what’s more, end up greatly exceeding – your expectations. And so it proves with Kathryn’s latest venture, which introduces a new working band intriguingly named The Darkening (after the Northumbrian name for twilight); its five musicians expand the sonic palette significantly over and above that employed by Kathryn’s previous (and in the main more overtly traditional-sounding) lineups. But hey, that doesn’t mean bidding farewell to the traditional influences or sounds though – far from it, for those elements still form the core of Kathryn’s musical adventures. The difference now is that their role has been freshly reimagined in the latest band context and its (now more complex) texture – in other words, the musicians play as a fully integrated ensemble, not just as a glorified backing band for the “star turn”. Here, Kathryn’s pipes and fiddle are joined by accordion (Amy Thatcher, the only band member carried through from Kathryn’s previous band The Side), octave mandolin (Kieran Szifris), fiddle (Kate Young), bodhrán/percussion (Cormac Byrne) and drumkit (Joe Truswell), with occasional touches of synth, charango, found sounds and additional exotic percussion. This new project also sees a further specific departure from Kathryn’s previous work in that it entails a greater exploration of the voice and a more extensive concentration on song-based material, with Kate, Amy and Kathryn all taking a share in the singing, a combination that gives rise to some really satisfying harmony work as well as sparking off imaginative vocal arrangements.

The key to Hollowbone is the album’s title, which denotes a shamanistic instrument used for channelling ancient voices; therein lies the biggest clue to the musical content of Kathryn’s latest offering, that vital word “channelling”, for Kathryn’s creative musical personality acts as a conduit for the ancient voices of tradition – ie. the songs, tunes and legends of her native Northumbria.

The ancient voice is quite literally heard to become the voice of today in Hollowbone’s opening salvo, O-U-T Spells Out, a rampaging rap-style mantra taking an “ironic look at borders, walls, barriers”. It’s based on old counting, skipping and playground games from Northumberland and beyond, and delivered in a pulsating, thrusting style strongly influenced by the Limerick hip-hop duo Rubberbandits’ hard-hitting 2017 single Sonny. (Necessary health warning: this track’s almost certainly the most radical piece on the album, and if you can cope with that then you’ll likely be fine with the rest of the disc.) In contrast, but still of highlight status (and perhaps the closest to listener expectations) is the pair of linked tunes inspired by the beauty and wildness of Lindisfarne, the Holy Island (track 4). But the adrenalin level remains high whatever the tempo and mood on this constantly chimeric, shape-shifting album. Joe’s pounding drumming features prominently on several of the tracks, taking Kathryn’s enterprising arrangements into a realm beyond folk-rock – and very exciting it is too.

Practising what it preaches, the album’s recurring theme is never absent, as the ancient is filtered through into the modern “like ribbons through history”, two hands simultaneously stretching out into the past and the future, weaving contemporary resonances into the oldest songs and tunes, whether these be pagan dance tunes or dialect mining songs (the Colliers sequence is especially compelling). Another disc highlight is the vocal track Nemesis, Kathryn’s ingenious and inspired quasi-reconstruction of a song composed by Hadrian’s favourite musician, the Greek Mesomedes, which really does transport the listener back in time; Kathryn describes it as “our way of trying to forge a relationship with the people who lived in the area (of Hadrian’s Wall) over the last 2000 years”. Darlington is a cool harmonised a cappella setting of an anonymous rhyme, which is complemented by another lustier yet more enigmatic old song Aboot The Bush (this one really rocks – like something High Tide might’ve conjured forth back in 1970). Cockle Bridge, a medley of tunes ancient (Cockle Geordie from the Northumbrian Minstrelsy) and modern (Kathryn’s own Bridge Reel), arises out of a deliciously animated percussion groove. Fine as the full band performs though, Kathryn saves one of the album’s best moments till the end.

The spellbinding final track Holywell Pool, a hushed and brilliantly eerie setting of her father Mike’s spookily evocative poem, was recorded by just Kathryn, Amy and Kate after the rest of the band had left the studio; its delicate percussion sounds come from objects found in or near Kathryn’s house, including stones from the river Rede, while further “songs and voices from the well” and out of the air are conjured through found nature sounds. The track could almost’ve been an outtake from the ISB’s Hangman’s Beautiful Daughter… It’s a truly amazing conclusion to a truly amazing, and seriously visionary album, which connects the past and the present in a unique way. It also benefits from a recording that’s miraculously clear and detailed so that all the instrumental and vocal strands can be followed throughout and in believable perspective even where the balance itself is tricky. Hollowbone is definitely an early contender for album of the year in my book.