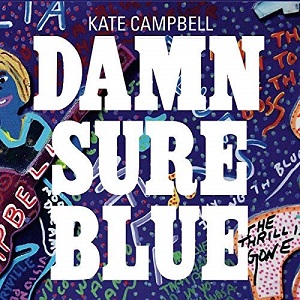 
Produced by and featuring Will Kimbrough, for her first new studio recordings in six years, Campbell says she turned to Johnny Cash for inspiration, specifically in covering his cod Irish lament for home, 'Forty Shades of Green', and a song he immortalised, 'Ballad of Ira Hayes', Peter La Forge's true story of the Native American marine who, one of those who planted the flag at Iwo Jima, came home a hero and died a homeless drunk, here taken at a slower pace with the verses spoken.

There's three other covers. 'The Great Atomic Power' is a driving blues boogie take on the Louvin's 50s bluegrass gospel inspired by the prospect of a nuclear apocalypse, a similar state of mind informing Erik Kaz's hymnal 'Christ, It's Mighty Cold Outside' is enrobed with Chris Carmichael's violin and incorporates a snatch of Paul Simon's 'American Tune 'for the bridge.

Everything else is written by Campbell in collaboration with either Kimbrough or Tom Kimmel, most steeped in the mood of frustration and discontent with the state of the nation that permeates the album. Kimmell shares credit for the twangsome guitar, walking beat countrified title track opener ("I can't see why good people do/Such hateful things, but they damn sure do"), while, placed back to back, both 'Long Slow Train', set to a Cash-like chugging rhythm, and the Kimbrough co-penned gospel soul 'Change Should've Come By Now' both reflect on the continued failure to implement the changes the Civil Rights movement sought to bring about.

The downcast mood is also evidenced in the piano and cello-accompanied 'Sally Maxcy', co-written by Campbell and Kimmell along with Joanne Maxcy Martin and based around an 18th century letter of survival guilt following a drowning.

It's leavened by hope, however. Featuring a twangy guitar solo, 'When You Come Back Home' is a musically upbeat Baez-like folk rock song about love's devotion while, inspired by the Emily Dickinson poem of the same name and from whence comes the refrain), the Kimbrough co-write 'This, And My Heart Beside' strikes a note of positivism and the album closes calling for 'Peace, Precious Peace', a folk spiritual of unknown provenance learned from an album by 60s Grand Ole Opry banjo player David 'Stringbean' Ackerman, fiddle provided here by Emma McDowell. Damn sure good.