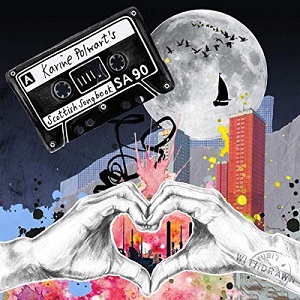 
Karine’s latest album, vastly different from the last two (A Pocket Of Wind Resistance and Laws Of Motion), presents a collection of 11 intensely thoughtful, and often provocative, covers of contemporary songs from the annals of Scottish pop and rock between 1973 and 2013 but with over half of the compositions dating from the 1980s. The album itself is being launched at next weekend’s Cambridge Folk Festival, but the original version of Scottish Songbook, which contained two dozen songs, was presented at the Edinburgh International Festival last summer, and reprised earlier this year at Celtic Connections. Here is not the place for a dissection of the album’s tracklist in terms of what’s been missed out compared to the EIF/CC incarnation, but suffice to say that the 11 songs selected for the album nonetheless preserve an impressive degree of coherence and unity despite their disparate origins.

It’s important to view Scottish Songbook in the light of the songs’ intense emotional and political resonance, specifically in terms of Karine’s own musical background, for by and large these are the songs that she grew up with. She realises their strong commonality with folk music – which, essentially, is covering songs, whether or not they be traditional songs that no-one “owns”. She covers songs (any songs, not just folk songs) “because they really matter”; the songs on this album “say something about where I’m from and where I live”, Karine says; and she recognises the importance of this connectivity while acknowledging that at the same time meanings can change too with time. For a singer like Karine, “it’s a matter of making the songs your own and singing them with your own heart.” For the point of a song is its story, its meaning, its message – and this principle is the same across all species of song. “The real challenge and joy is getting inside them, simply because the lyrics and melodies are often so powerful and resonant”. Karine’s earnest belief is that “the deceptive economy, simplicity and openness of pop songs allows them to endure and evolve in meaning, as the best folk songs do, too”.

For a good song is a good song; and the common thread between pop songs, her own songs and those of tradition is that they may all encapsulate themes of “resilience and resistance, cries of despair and dreams of something better.” Karine has identified the importance and key messages of these songs, songs which perhaps due the ephemeral and/or alien nature of their pop settings have been in greater danger of being undersold. “I come to the rich archive of Scottish pop music with a folk singer’s heart. I dig into the songs that connect with me, as centuries-old ballads often do, too, not because of their retrospective sentimentality or their uniquely Scottish character, but for their ability to reveal something about living here, in this place, right now.”

So I start with the perennial double-edged sword, the ambivalent reaction and the inevitable conundrum of the cover version, that of: does one need to be familiar with the original? For interestingly, in this instance, I’m forced to admit at the start that virtually all of these songs were unknown to me, because during the key decades I was simply not listening to very much music outside of folk, classical and roots/world; I found the majority of contemporary pop and rock music shallow and superficial, and the glossy or predominantly synthy backings did nothing to entice me in to the lyrics buried beneath. So, hearing Karine’s differently adorned deconstructions which, with the ever-sympathetic assistance of collaborators Steven Polwart, Inge Thomson, Graeme Smillie, Calum McIntyre and Louis Abbott, tellingly expose the lyric content, proves something of a revelation, even though I’ve been unable to gauge the full extent of the departure from, or the fresh perspectives granted to, the original versions by Karine’s insights (it has, however, provided the impetus for me to investigate the original artists’ recordings – much in the way that cover versions of previous eras had invariably inspired me to delve back to the sources).

But although I can appreciate that Karine is here delivering not so much reinterpretations as often radical re-toolings, transformations that dress the core sentiments, stories and messages in sensitively reimagined new costumes, in most cases I’m only able to hear these songs purely as (currently new to me) songs, without the trappings of past experience or the additional “baggage” of personal memory. Thus making this review a more difficult exercise, and one which will likely need to be read in conjunction with that of a reviewer more deeply conversant with the pop music of the ’80s. However, I shall certainly be revisiting Karine’s Songbook when I have furthered my quest! And moreover, it’s well worth taking a detailed look at the series of online essays that Karine has written in support of the Songbook (https://medium.com/@blog.kpolwart).

I was therefore a touch surprised (and really happy) to find that in almost all cases these songs did connect for me. In all honesty, I might well be inclined to attribute this reaction more to Karine’s advocacy and uniquely personal commitment than to any specific resonances conjured by the lyrics – which is probably not what the songs’ writers would expect, or indeed wish, to read…The instrumental settings are attractive, ingenious and eclectic, complementing Karine’s clear vocals in interesting and rewarding ways. Newly perceived changes to songs’ meanings may be occasioned by recent life events; these may be pointed by additional creative touches – devices such as the interpolation, on Since Yesterday, of a recording of Karine’s grandfather singing an Irish traditional song, which expands the song’s message into the themes of ageing and loss brought about through Alzheimer’s. And on Stuart Adamson’s soaring yet knowingly vulnerable Big Country anthem Change the characteristic euphoric despair, and universality and poignancy, of its various levels of message are equally strongly conveyed through Karine’s sweeter-textured reading. Karine’s “ramped-up” rendition of John Martyn’s prescient, portentous gospel-flavoured Don’t Want To Know (from the seminal Solid Air album) is a real triumph, as is her intimate, gently McGarrigle-esque, beautifully harmonised take on Gerry Rafferty’s Whatever’s Written In Your Heart (an underrated track from his hit album City To City), while her close identification with the empowering message of Ivor Cutler’s atypical, delicately hymnal Women Of The World is strongly in evidence (and, unexpectedly, even accentuated by Louis taking the vocal lead at the song’s start). I was also taken with Karine’s presentation of the Frightened Rabbit song Swim Until You Can’t See Land (by the late Scott Hutchison) and Biffy Clyro’s Machines – neither of which I had heard before.

Karine’s own expressive insights in her Scottish Songbook, her self-styled “50-year romp through Scottish pop via a folk singer’s ears”, fully vindicate her central thesis as outlined in the quotes above, and I both fully endorse her philosophy and method and heartily thank her for introducing me to some very fine new songs.

The Whole Of The Moon