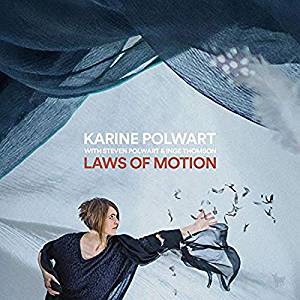 
Less than a year since the release of A Pocket of Wind Resistance, a collection of song, spoken word and field recordings based around her first theatre show, Polwart returns alongside brother Steven on guitar and accordionist Inge Thomson for her first trio recording since 2012's Traces.

As the title suggests, it continues the stage production's themes of migration in its different forms, opening with the somnolent six-minute 'Ophelia' where she recalls Hejira era Joni Mitchell, the title sung like a voice calling on the wind. Indeed, it was actually inspired by the effects of 2017's Hurricane Ophelia which brought red Saharan sand to the UK as well as the wildfires in Galicia and Portugal which led to black ash falling in Estonia, serving as a metaphorical reminder that we share the same earth and air.

Gradually introducing drums, electric guitar and keyboards, the title track, co-written with Lau's Martin Green originally appeared on Flit, his solo project on a theme of migration with its lines about "searchlights at the tunnel gate, barbed wire at the harbour. Restless men and women blow like sands across the border", asking the question "who doesn't want another chance?" Polwart's version more musically muscular with stronger folk colours.

Likewise, introduced by most likely a wheezing shruti box, 'Suitcase' stems from the same source. Stripped of the original's spoken narrative and with a less brooding tone, Polwart sounding not unlike Suzanne Vega in the final moments, it's a song about the Kinderstransport, the underground network that smuggled Jewish children out of Germany in the run up to WWII, although the line "the suitcase in the lobby is always packed and ready…the only thing you need to know is when it's time to go" has far wider refugee resonances.

There's a third collaboration with Green, this time born from her working on a local primary school community project where she learned about a seven-acre Japanese garden established in 1907 at her Cowden Castle home on the edge of the Ochil Hills in historic Clackmannanshire by Scottish traveller, gardener and writer Isabella Christie. Shifting between delicate fingerpicking and more robust flourishes with clacking, clicking percussion, 'Matsuo's Welcome To Muckhart' is titled for Shinzaburo Matsuo who, two years after losing his family in the Great Earthquake of 1923, sailed "halfway round the world" to tend the garden until his death in 1937.

While the above talk of change, 'Cornerstone' celebrates permanence, agile fingerpicked guitar and accordion drone the foundation for song about the Isle of May in the Firth of Forth, the lyrics' narrative spanning three centuries from the holy man at the altar stone blessing the wind and the beacon keeper sounding warnings to the ships to the scientist in her clifftop hide, tending the puffin nests on the rock.

It's not the only time on the album when avian imagery takes wing. The only non-original, given a suitably stark arrangement of 'Crow on the Cradle' is Sydney Carter's oft-covered styled anti-war dark lullaby, followed, in turn, by 'The Robin' which, with a simple repeated descending guitar pattern, deep bass, glockenspiel shimmer and harmonies, harks to its red breast ("the blood of everyone who ever lived") and song ("of everyone who's been and gone … everyone who's still to come") as allegorical of humankind's resilience.

The track most likely to draw attention is 'I Burn But I Am Not Consumed', the title the clan motto of Donald Trump's maternal Scottish family. Opening with spoken narration about the emigration of his Isle of Lewis-born mother, Mary Ann Macleod, to New York in 1950, her subsequent marriage and motherhood, and the return of her middle son to Scotland to build an executive golf course, changing the landscape forever in the process. It gives Polwart pause to ponder what the ancient rocks of Lewis, among the oldest on the planet, would think of the current incumbent of the White House, striking out into a staccato rhythm with martial flourishes as the still mostly spoken lyrics skewer his narcissism, setting his blustering shows of power and stoking of fears against that of the wind, the sun, the sea and three billion years of gravity which have no time for this "broken boy" who wants more and more and more, the final line co-opting the motto for nature itself.

The two remaining numbers both have personal resonances, the lively fretwork of 'Young Man On A Mountain' the setting for a song about her grandfather tracing his life from a forester in the Trossachs to his never spoken about experiences at the Battle of Monte Cerere, in northern Italy, in WWII, the jazzy Davey Graham mood of the verses punctuated by a gently soaring, accordion-accompanied echoing chorus.

The other, 'Cassiopeia', with its fractured percussion and minimalist keyboards closes the album, today's tensions prompting a recollection of her nine-year-old self's fears of nuclear war sparked by the Protect and Survive pamphlet produced by the Thatcher government during the Cold War 80s. Opening with her singing about looking out the window at the tranquil starlit night sky, the spoken passages are taken directly from the radio broadcasts, such as about taking shelter in the room furthest from the outside and stocking food for two weeks, intercut with Polwart wondering "how far is it from Leningrad to Bonnybridge?" and how they're "gonna hide in the jam cupboard". It ends on a repeated refrain of 'we are gonna be survivors", only to be tempered with the final lines of "This is how it felt/And it feels like this all over again/Only now, where's the jam cupboard?"

Newton's first law of motion states that every object will remain at rest or in uniform motion in a straight line unless compelled to change its state by the action of an external force. With this breathtaking, musically and lyrically articulate, complex yet accessible work, Polwart is that force.