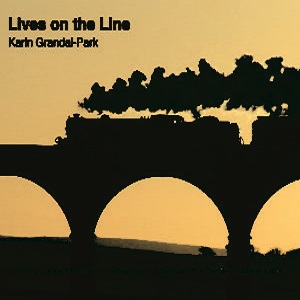 
Preston-born singer Karin had for some 20 years (until recently, indeed) lived at Kirkby Stephen, within a couple of miles of the Settle-Carlisle Railway. But it was only after discovering and becoming involved in folk music five years ago that her songwriting began to explore aspects of local history and tradition. So much so, in fact, that she became immersed in researching the lives of the navvies who built the railway, gaining such insights that a songwriting project was born.

This was accepted to form part of Stories In Stone, a scheme of conservation and community initiatives developed by the Ingleborough Dales Landscape Partnership, led by the Yorkshire Dales Millennium Trust and supported by the National Lottery Heritage Fund. In all, seven songs (including six newly composed by Karin) were written and recorded with the assistance of three excellent local musicians Rebecca Clare Douglas (the project’s Musical Director), Allan Ideson and Mike Harding (himself), and now they’re released on this handsomely-presented – and entirely aptly-titled – EP.

Karin’s interest was initially sparked by hearing (on Mr. Harding’s recommendation) the iconic Alan Bell song Alice White, telling the poignant story of Alice who runs off with a navvy called Dandy Jack and then is forced to take another man after Dandy Jack’s demise following a fall of stone whilst working on the line. Alan’s song in turn inspired Karin to tell Alice’s backstory in a new song of her own, In The Springtime; she went on to research and write songs about the lives of the navvies themselves and the even harsher lives of their womenfolk.

Karin’s original songs for this project are crafted in the approved folk manner, with authentically catchy melodic interest a-plenty, while providing insightful portraits of the characters depicted. Going On A Randy is a colourful account of this infamous practice (navvy parlance for an extended drinking spree using hard-earned wages), appropriately set to a lively and increasingly drunken jig-rhythm. Market Train is a wonderfully picaresque evocation of the navvies’ trips to Saturday’s market sale at the Batty Green shanty town (you can feel the rolling rhythm of the train as the song transports you there from Jericho). Oh To Be A Navvy realistically yet wistfully dashes the dreams, ideals and expectations of a new recruit to navvying; the conclusion however is that ultimately “it’s better to be a navvy wife than a widow left alone”.

A Day Like Any Other is a finely detailed yet unsentimental navvy’s-eye account of a cave-in during the creation of one of the ventilation shafts for the Blea Moor tunnel. The closing song, Hide From The Devil, a sinister yet “cautiously rollicking” indictment of the activities of the Temperance League at the shanty towns, is given further verisimilitude by using detail from real-life stories unearthed by Karin during her researches.

As I’ve remarked in previous reviews (of Karin’s earlier CDs with Rosie Clegg and Karl Robins respectively), Karin’s assured and well-experienced voice is an ideal vehicle for her songs; both expression and diction are second to none, and she has the true gift of inhabiting her characters and making the listener believe in them. And her musical companions provide fulsome and idiomatic instrumental accompaniment variously involving violin, viola, piano, guitar, mandolin, banjo, harmonica, bodhrán and spoons.

Also, as I’ve already hinted, the presentation of this EP is impeccable, with attractive design, artwork and photography, but should you wish to know even more about the songs and their stories, an abundance of extra information, together with the complete song lyrics, can be found on Karin’s well-stocked website.

Finally, it is obvious that there are many more stories to be told; so I can only hope that Karin’s researches might yet yield a further batch of songs on this theme, for Lives On The Line certainly leaves me wanting more.