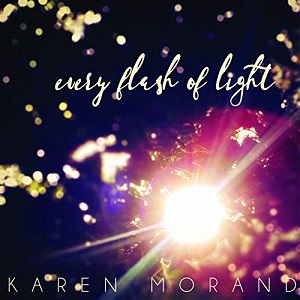 
"Every Flash Of Light" is Toronto born Karen Morand's sophomore album, which originally emerged into the world roughly a year ago and has been picking up momentum, and an extra track, "Dress Me Up" that has seen to the album getting to a bigger audience and making the jump across the Atlantic.

Her star has been building back in Canada, where she has worked with the likes of Manitoba Hal and Spirit Of The Wet's Linda McRae, who also gets a co-write. It should also mean that it'll come as nor surprise that Karen has a sound that flirts and flits between country blues and country rock, skirting down the Americana vein.

One of the strengths of "Every Flash Of Light" is empathy between singer and the song, you can feel the dive into the emotional content and a desire to reach out with a positive vibe, without feeling over sweet or sentimental. That's not to say there aren't darker themes on the mini album more that they are there in order to be able to give a point on the journey towards a lighter side.

There seems to be a focus on karma that emerges across a number of songs, do the right thing and the right things will happen to you and fortunately does it in a way that doesn't feel preachy, rather a more reflective tone.

Morand, has a good vocal style, rich and deep, something that's matched in the production. It's easy to see why Karen is getting herself noticed and "Every Flash Of Light" is definitely playing her part in that. It's not without fault, at seven tracks it's too short, somehow missing the cut off point of an EP, but not quite filling enough to be the main meal. You could argue that leaving you wanting more is a good thing, it can be, call it selfish, but another track or two would have seen Karen Morand and "Every Flash Of Light", step up from the good to the really good, but rest assured there should be more coming and it's definitely worth your time checking out.

When The Smoke Clears