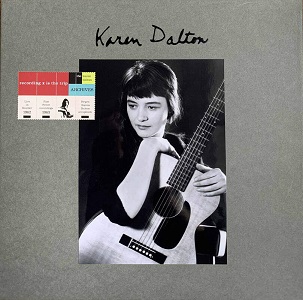 
Born Jean Karen Cariker in Texas, raised in Oklahoma and described by Fred Neil as having a voice like Billie Holiday and playing guitar like Jerry Reed, Dalton moved to Greenwich Village in the early 60s and became part of the new folk set that includes Neil, Dylan and Tim Hardin, indeed she was one of the first to record the latter's Reason To Believe.

A heroin addict for most of her early life, she died of an AIDS-related illness in 1993, aged 55, leaving behind just two studio albums, 1969's It's So Hard to Tell Who's Going to Love You the Best and 1971's In My Own Time. She achieved little success or cognition in her lif time, but has been cited as an influence by the likes of Nick Cave and Joanna Newsom and, in the wake of posthumous interest, live recordings from 1962 and 1963 were subsequently released by her friend, Joe Loop who ran the The Attic in Boulder in the early 60's, as the double album Cotton Eyed Joe, recorded at the club, and Green Rocky Road, two-track recordings with Dalton on guitar and banjo from her home in Pine Street, in 2007 and 2008, respectively.

These have now been gathered together as part of this lavish box set, containing three discs, on both CD and vinyl as well as a collection of outtakes available via a download card that features hitherto unreleased outtakes from the home recordings with guest appearances by Richard Tucker on saxophone, Loop on drums and additional banjo by Ray Chatfield, plus there's also a 56-page 12" book with testimonies from her friends and her own archives of music, photos and notes as well as a guitar tabs Karen Dalton T-Shirt.

Disc One, recorded at The Attic, features 10 numbers, opening with a near six-minute cover of Ray Charles' 'It's Alright', a stark arrangement with just her desolate guitar and haunted, bluesy voice. That's pretty much the tone and mood throughout the set which, continued on Disc Two, mixes together traditional material like 'Cotton Eyed Joe' (on which the crowd applaud before she's finished, prompting subsequent laughter), 'Everytime I Think of Freedom', an unaccompanied 'Old Hannah', 'Darling Corey', 'Katie Cruel' (one of her signature songs) and banjo showcase 'Mole In The Ground' along with songs by Ledbetter ('Fannin Street','Good Morning Blues'), Jelly Roll Morton ('Pallet On The Floor') and Guthrie ('Pastures of Plenty') and a second Charles' cover in 'Blackjack'. The first disc also includes two numbers by her friend Fred Neil, 'Red Are The Flowers', written about the flowers that bloomed in Hiroshima and Nagasaki after the dropping of the atom bombs, and 'Blues On The Ceiling'.

The original release also had a DVD which featured a further Neil song, 'Little Bit of Rain' along with the traditional 'Blues Jumped The Rabbit' and 'God Bless The Child', but which aren't featured here.

The sound quality is, inevitably, not always great, and, while there's no audience interruptions and talking, the same holds true for the raw recordings on Disc Three, on which you can hear her talking with her mother and the phone ringing, Again, the material is largely traditional, including 'Whoopee Ti Yi Yo' and 'Skillet Good and Greasy' both showcasing her clawhammer banjo as does an extended near 13-minute version of 'Nottingham Town' with its dissonant notes. There's also early rehearsals of a low voiced 'Ribbon Bow', 'Katie Cruel' and, also part of the club set, Leroy Carr's 'In the Evening (It's So Hard to Tell Who's Going to Love You the Best)', all of which would subsequently appear on her studio albums, as well as 'Green Rocky Road' which features a not entirely successful overlay of banjo and guitar.

The outtakes download comprises a further 13 numbers from those home recordings, opening with a seven-minute noodle through 'You Don't Know My Mind', bringing drums into the frame for the lively bluegrass 'Crawdad Hole', the jugband goodtime stomp of 'Come On Down To My House', a lazing, brushed drums and banjo 'Hurry on Down' and, again with drums, a suitably addled five minute take of 'Cocaine'. Along with early sketches of 'Fannin Street' and 'Cotton Eyed Joe', to compensate for the absence of the DVD recordings, there's also both the Holiday classic and a terrific bleary-eyed 'Blues Jumped On A Rabbit' with Tucker on sax.

It's not a definitive live collection, there were scratchy 1966 recordings unearthed (released in 2012 by Delmore and now out of print but available on YouTube) that include Hardin's 'Reason To Believe', but in which Loop had no involvement, and given this is retailing at around £100, you're going to have to be a real fans (and hopefully not already have the live albums) or dedicatedly curious about expanding your folk music awareness and collection, but either way it's well worth the investment.

Something On Your Mind