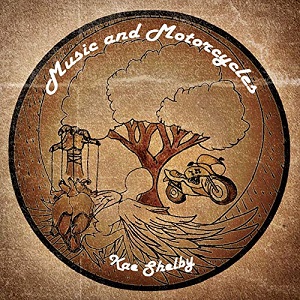 
Motorcycles have a twin role in song, on one hand they are the symbol of rebellion the vehicle of choice for hitting the open road, sunglasses on, wind in the hair and a journey to be embarked on. On the other side of the coin the fatality rate of motorcycle riding partners is pretty much on a par with being the younger, prettier sister or walking across the fens when your boyfriend is shooting swans.

Kae Shelby's "Music And Motorcycles" draws on both sides of that ying and yang. Music and motorcycles is an album that speaks in metaphor accompanied a country blues, country rock soundtrack. Shelby suffered losing both her mother and brother in relatively short succession and this record is something of a redemption, driven, or ridden if you prefer, by Kae Shelby's emotionally charged vocal.

One of the things I like about the album is that it's an album about choices taken. You could choose to wallow in self-pity and head off down the road to oblivion or you can simply take the choice to do what's right for you and head out on the journey with that wind blowing in your hair.

"Music & Motorcycles" is an album about spirit rather than soul, one that sets both singer and listener free and if it has a weakness, it's arguably too short, it sort of hangs out there, but maybe that's not a bad thing.