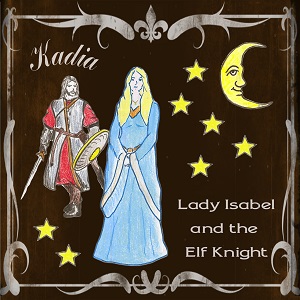 
It's been a couple of years since the release of Kadia's debut album, a time spent working hard promoting both album and themselves as well as working on albums by a number of other musicians and well the time was ripe for another release and it has to be said that "The Outlandish Collection" has shown that a dive into the tradition has proven to be very fecund territory.

Unlike the album, the new EP is made of traditional tunes and Kadia's take on them, five tracks that allow a real sense of pace and drama to permeate with the trio's individual style. Opening with one of the oldest songs known in the folk canon, "Lady Isabel & The Elf Knight" a song that has been recorded in numerous versions by numerous acts, the trio are immediately laying down a marker that they deserve to be heard in quite impressive company, a feeling they enhance by following it up immediately with an instrumental, "The Cricketer's Set" to equal high quality.

Whilst the EP is becoming a defacto release mechanism, even having single taken from it, "The Outlandish Collection" shows one weakness, after just five tracks you reach the end wanting more and that maybe another five tracks is what's required and the replay button is reached for.

What it does do though is show just how far Kadia have come. Their debut album set quite a dynamic, but this new EP shows that they are still very much on a rising wave, one that is tight and with the power to impress.

Through "The Outlandish Collection" Kadia have ensured that traditional music remains, live, vibrant and most important, relevant. It also identifies them as a band that not only feels comfortable blending in their own material with interpreting songs created by writers lost in antiquity, but positively thrive on it.

Lady Isabel And The Elf Knight