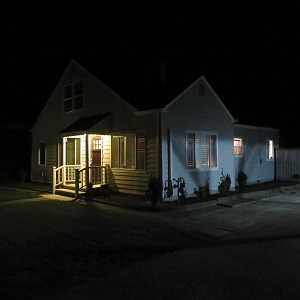 
Having recently disposed of pretty much all his possessions, Jurado's lifestyle now mirrors his music, stripped down to the essentials, basically acoustic guitar, bass (by Josh Gordon), the occasional organ and a drum machine framing his hushed, fragile and vulnerable vocals. Not that this is necessarily lo fi stuff, opening track 'Birds Tricked Into The Trees' opening with a swaggering walking beat with drums, keys and electric guitar as he profers the relationship wisdom that "It's about/Knowin' when to say you're wrong/To get it right all the time/Means it's over".

Rather lovely with a vague lullaby air, 'Ochoa' is a tribute to the late singer-songwriter and sometime collaborator Richard Swfit, born Ricardo Ochoa, followed by the bruised love song Anna Hyatt with its percussive guitar work and organ backing and then, a steady drum thump underpinning circling guitar notes and ethereal washes of sound, Arthur Aware as he sings "I keep all of my prized reflections in glass jars from the coroner/And when I get old I'm looking at myself".

Indeed, there's several song with names in or as their titles, next up being the softly pulsing 'Francine', a track on which, with its keys and relaxed violin, the influence of Roxy Music's For Your Pleasure is easy to trace.

A particular highlight is 'Fool Maria', a fingerpicked stream-of-consciousness wander built on just two chords as he muses how "We are fiction as it's written // The bleeding ink on paper" and "if I said that I had chose this, I then would be a liar/I am only living sentences that were long before I died here", stretching out the musical structure and textures for the early hours scuffed shuffle of 'When You Were Few' with its shades of Memphis soul and tinkling keys.

Then up pops Sandra, for another introspective reflection, a simply strummed leaving song that has the air of his lover left sleepily lazing in bed in the morning while he's off out the door ("I'm still changing my mind, not that you deserve to know my plans or where I'm going"). Though not quite the end of the album, 'The End Of The Road' waltzes in with an upbeat pledge of love ("I've spent a lifetime looking for you/Patiently waiting to fall into view/And now that I've found you my running is over/I have made it to the end of the road") before bowing out with the drum machine-backed enervated Sunday morning haze of 'Frankie' "watching the sky fold into itself", advising not to "get hung up on daylight".

Having downsized his personal possessions, this album again reinforces that in Jurado's case less can indeed be more. The title asks a question, the answer is everything's just fine pussycat.

Birds Tricked Into The Trees