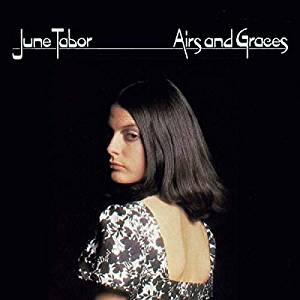 
It’s no exaggeration to describe June Tabor’s debut solo album Airs And Graces (vintage 1976) as one of the most essential and influential folk albums ever made. But I’m ashamed to admit that I was musically otherwise occupied at the time of its release, and it would be some years before I was to experience June’s singing at all, let alone appreciate her truly special, unique qualities. The fact is that when I finally did get to hear it (although, I’m embarrassed to say, I can’t place exactly or even approximately when, in terms of date or year!) I was struck dumb, numb even, by its quiet, almost rarefied beauty and its curiously understated, tightly coiled wellspring of vocal power. Power in a completely different sense from the full-on folk vocals of “the tradition”, the received finger-in-the-ear or the abrasive singalong, or the thrusting folk-rock delivery. At that point I’d not even been made aware of June’s status – indeed, I’d up till then missed out on so many of the really important 70s and 80s folk albums. But I digress…

This reissue, in the anniversary Topic Treasures series, is something of an object lesson on how to celebrate an original album, both in terms of excellent remastered sound and in terms of presentation. The slipcase contains a single CD, this comprising the entire original 10-track issue plus four crucial bonus tracks recorded at various points between 1971 and 1974 – ie, mostly more than two years before the recording of the Airs And Graces LP itself. These bonus tracks have been available previously, but that was on 2005’s limited-edition four-disc boxed-set anthology Always, so they’re good to rediscover in this context.

The LP was eventually recorded at the rather small Sound Techniques recording studio (as it turned out, an appropriately intimate location to match June’s “subtly emotive and imaginative” delivery). The full album was truly one of those “wait until absolutely right before recording” moments, even though June had for a few years been honing her singing craft at folk clubs, bravely unaccompanied. It was perhaps surprising, then, that her debut solo LP involved a modicum of instrumental accompaniment for half of the tracks (and, no doubt spurred on by her experience on the Silly Sisters joint album with Maddy Prior, some double-tracking on Bonny May).

And, although all but two of the songs were traditional in origin, the undoubted kernel of the whole record was a non-traditional song, sung unaccompanied -.Eric Bogle’s priceless anti-war song And The Band Played Waltzing Matilda, a première recording (the full back-story is in the annals of folk history and is duly reproduced in the booklet) and a matchless and tremendously moving rendition. Other unaccompanied successes on the album include a concise Reynardine sporting a completely different (and arguably more interesting) melody from the then-more-familiar Sandy Denny version; a superb account of Queen Among The Heather, personally owned; and a definitive Plains Of Waterloo.

But the instrumentally accompanied selections also proved of considerable worth, not least for the distinctive and wonderfully expert contributions of Nic Jones (guitar on two tracks, fiddle on The Merchant’s Son) and Jon Gillaspie (from Cajun Moon) on (variously) piano, organ, roxichord, bassoon and sopranino recorder; Jon’s piano accompaniment on the melancholy John Tams song Pull Down Lads is as incomparable and fitting as June’s own powerful performance. The album’s opening track was an immediate attention-grabber too though, featuring June and Nic tripping unbelievably lightly across, around and through a playful, intensely tricky take on While Gamekeepers Lie Sleeping that pays no heed to conventional phrasing and time-signatures and gets away with it (and how!).

Airs And Graces is simply one of those seminal LPs of the “every home should have one” category. This special new edition is unlikely to be surpassed: the inclusion of a helpful booklet essay and excellent new song notes by June herself is just one indication of the thoughtfulness with which it has been prepared (shame about the slightly slipshod proofreading though, with phrases missing here and there). Who needs deluxe vinyl reissues when a CD package can still be this good? Get it without delay, I say!