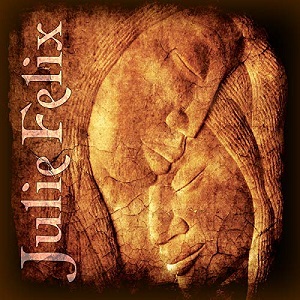 
The first thing to say about Julie Felix is that she is a survivor. She became very well known on the folk circuit in the 1960s and 1970s and also appeared regularly on TV with her own shows. Now she is 80 years old and is celebrating this milestone with a new album, her first for over ten years.

I must admit that I had almost forgotten about Julie but when the CD arrived on my desk, I started singing "Going To The Zoo" which I used to sing to my children in the long distant past. Julie did so much more than this but it is a song that will always remind me of my children growing up.

So, here we are in 2018 and Julie is still singing, recording and touring although she has never really stopped. This is her first album for many years but it has been worth the wait.

Her voice now has a mature edge to it, borne from her advancing years, but it still has that crystal clear quality to it coupled with her superb diction. Her voice might have changed slightly but her musical prowess on the guitar has not. Clever, subtle finger style playing that matches perfectly to her voice.

Music has always provided a vehicle for protests about the woes of the world and Julie was, and still is, one of the best exponents of this platform. The current album includes comments abut the Iraq war and a wonderful line in "Corbinista" that states " invest in education instead of weapons of annihilation." If only those in power would listen to Julie and this album.

One of the stand out tracks on the album is a version of Dory Previn's "Lady With The Braid" which suits effortlessly Julie's voice and guitar playing.

This is a delightfully stripped bare album with just touches of piano, violin and drums, but throughout it is driven and underpinned by Julie's voice and guitar. A real treat for fans of Julie Felix and vocals with real meaning.