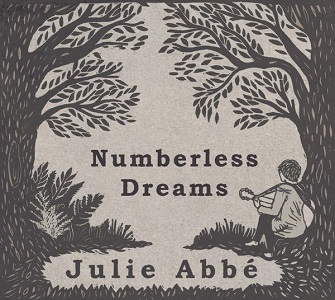 
Born in Poitou-Charentes, near Bordeaux in France, but now based in Bristol (and with no trace of Gallic accent), Abbé grew up amid traditional Bal folk music, French instrumental dance music, generally played on accordion, that came to popularity in 1880s Paris, although she's since incorporated, jazz, Latin and English and Irish folk into her repertoire, indeed her label's named for the Latin-jazz quartet in which h she previously played.

This, however, would seem to be her album debut, produced by Sid Goldsmith, who contributes guitar, concertina and double bass, and featuring Dominic Hooper on cello and backing vocal appearances by Amy Cox and Izzy Budd, both of whom she's worked with on previous projects. Although there's one self-penned number, the gently undulating instrumental waltz Flagstones, the material is otherwise balanced between arrangements of traditional tunes and settings of poems by W.B.Yeats.

It's one such that, underpinned by cello, opens proceedings with 'A Poet To His Beloved', published in 1899 as part of The Wind Among The Reeds collection, it was written for Maude Gonne and its from these lines that the album title is taken. Set to a simple, courtly tune on strummed guitar and featuring Abbé crooning the wordless backing, it's followed by one of his more familiar works, 'The Song of Wandering Aengus', initially titled 'A Mad Song' on its first printing in 1987 and retitled for the 1899 anthology, based on the legend of the Irish god and probably best known for its final lines about "The silver apples of the moon,/The golden apples of the sun".

Inspired by the popular intrepretation by Nic Jones on his final album, accompanied by concertina the first of the traditional material arrives with 'Courting Is A Pleasure', sometimes known as 'Handsome Molly, in which a young lad falls for a lass with a roving eye, although she's rewritten the third verse, repeated the first and dropped the ending so as to give things a more hopeful conclusion.

Conflating verses, she joins voices with Cox for the unaccompanied 'Flower Of Magherally', a song from Ulster, Margherally being a small town near Banbridge, that has a happier resolution to the wedding dreams, before moving to two further traditional numbers. From Scotland comes the mournful, cello and double bass-coloured 'The Boatman', or 'Fhir A Bata', part sung in Scots Gaelic, based on the Sandy Denny version, but the lyrics changed from a woman awaiting and bewailing her fickle lover into the story of a man who dies at sea, then, inspired by Any Irvine's recording, and again given a rewrite, another account of blighted love, this time from Co. Antrim.

The third Yeats track is again well-known, (The) 'Stolen Child, a poem about the prediliction of faeries, or certainly Irish ones, to beguile away children, written in 1886 and published in 1889's The Wanderings of Oisin and Other Poems. Adapted by Humphrey Lloyd, who reorders some of the lines, it's set to a courtly-styled melody by Daniel Bloodstone.

It's back to Irish traditional folk with an a cappela rendition of 'Eighteen Years Old (more concerns about getting married) followed by 'As I Roved Out, Budd's harmonies providing the woman's voice in yet another tale of lovers wronged by false hearts, although the lyrics here are very different to any of the versions I could track down.

A much recorded number in the folk canon, another unaccompanied number that has her multi-tracking the harmonies, 'Claudy Banks' is the last of the traditional songs, the album closing with a final Yeats poem, 'He Wishes For The Cloths of Heaven'. Originally titled Aedh rather than He, it's one of his shortest verses at just eight lines, set to a minstrel-like guitar and cello arrangement, Abbé set it a tune she'd written a couple of nights earlier after hearing of the passing of a family friend, removing the word 'because' from the final line to fit.

Plaintive, melancholic and captivating it is, as Yeats put it, crafted "with reverent hands".

A Poet To His Beloved