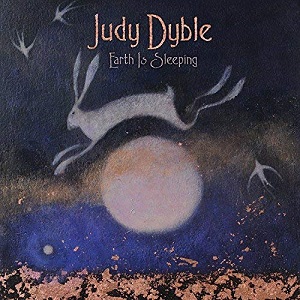 
Enchanting, distinctive, the voice of Judy Dyble is always a pleasure to listen to, she has that quintessential Englishness that sets her apart from her peers.

"Earth Is Sleeping" is the latest release from the former Fairport singer who progressed to Trader Horne, a duo with Jackie McAuley (a reworking of their "Velvet To Atone" included here is stunning) before taking an extended break from recording. It's an album that gently mixes and melds acoustic styles in a wonderfully pleasing way that transcends all attempts at piegonholing.

"Marianna" opens the album, it's dreamlike, a wakening song. It gives you that warm muzzley feeling you get in the morning when you know everything is fine.

We can all think everything is fine in a relationship, we blindly do what we think is best, we want to bring the stars down to show our love when what's really needed is a smile and time to talk together till dawn. "Promises", a men are from Mars moment, perfectly enhanced by Jeremy Salmon's electric guitar, that you can't fail to love.

Losing love through tragedy and trying to cope, heart achingly sad, "Answerphone" addresses the lengths you can go to just to hear "that" voice one more time. A dark place, that point where a part of you still believes it hasn't really happened.

"Take Me Dancing" is the perfect antidote, a song which first appeared on Judy's incredible three disc anthology "Gathering The Threads", the original inspiration a memory of a young girl yearning to be grown up.

Yearnings and desires. Our dreams to detract from the sometimes dreary existence of daily life. The escapism explored in "Faded Elvis", a tale told of a shelf stacker whose electricity bill is more than he spends on food. For a short while though he can be Elvis, he can dream, his hope, his life bearable, King Of The Castle for an hour or more.

Caught up with dreams that don't last, "See What Your Words (did to me)" the ending of a love affair, lifted by the lilting violin of Steve Bingham leads to "Heart Of Stone" a majestic controlled response, seven minutes of melancholy steadfastness.

Even a heart of stone though melts for grandchildren as "Lullaby For Ellie" shows.

Can you catch a rainbow? Apparently scientists did. Between glass. And if you "Found a Rainbow" wouldn't you want to release it?

"Broken Day" those moments at the end of a relationship when there is nothing more to say, the realisation that "We've wasted time, on the love that has gone", not even the words left to write a letter, Phil Toms plaintive piano adds to the resigned feeling.

The beauty of a winter landscape, fresh snow, a walk with a rescue greyhound the inspiration behind the title track of the album. Brian Gulland's bassoon and Alistair Murphy's piano playfully capture the joy and pleasure of the ever changing frozen frieze being painted as we watch.

Uplifting thoughts that continue into the closing track "Newborn Creatures" a song about the joy and wonder of the world in which we live.

"Earth Is Sleeping" is an exquisite, enchanting, enduring record, it's up there with the very best from Judy Dyble's career to date. Highly recommended as is her excellent autobiography "An Accidental Musician