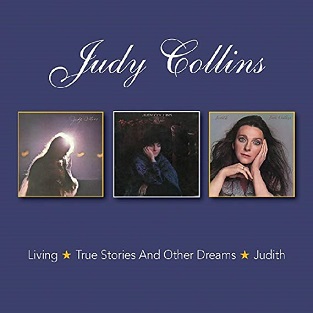 
This 2-CD reissue of three of Judy’s early-’70s LPs contains a number of Judy’s best-loved performances outside of the eternal hit Amazing Grace (which had appeared on her radical and adventurous LP Whales And Nightingales, which preceded the 1971 release Living by just one year).

Living was a live album of magnificent performances culled from Judy’s 1970 concert tour on which she was backed by a small band comprising Ry Cooder (guitars), Richard Bell (piano, guitar), Gene Taylor (bass) and Sue Evans (percussion) and augmented on Song For Judith (Open The Door) by a sizeable vocal chorus. The material was a persuasive mix too, albeit with “usual suspects” among the songwriters. High points included the two Leonard Cohen songs Joan Of Arc and Famous Blue Raincoat, an account of the traditional All Things Are Quite Silent, and Easy Times, which Judith co-wrote with actor Stacy Keach for a film about prison recidivism. Only the Dylan track (Just Like Tom Thumb’s Blues) had previously appeared on a Judy Collins album (that being In My Life).

True Stories And Other Dreams appeared after a two-year gap and the reasonable compilation album Colors (The Best Of). This notably contained five Judy Collins originals among its nine tracks, as well as a more varied selection of covers including Stephen Stills’ Manassas number So Begins The Task and Valerie Carter’s Cook With Honey. Pick of the bunch though was Tom Paxton’s The Hostage about the Attaca Prison riots. The backing crew for this album was extensive, and included Eric Weissberg, Steve Mandel, Don Payne and a host of top-grade sessioners; one unexpected name on the credits was Lou Killen (on concertina). Maybe this wasn’t Judy’s best collection, but there wasn’t really a weak track even if not all of the arrangements quite convinced.

The final album on this reissue package, Judith, was released in 1975. It used many of the same musicians as True Stories, but with Arif Mardin in charge of production except for on three key tracks with orchestral backings which come across as even more tasteful now than they did at the time. The material ranged even more widely too, with Judy stretching out in all musical directions, from the Sondheim show-tune Send In The Clowns (which was Judy’s second UK chart hit) and Jimmy Webb’s The Moon Is A Harsh Mistress through to standards I’ll Be Seeing You and Brother Can You Spare A Dime? and Steve Goodman’s iconic train song City Of New Orleans, although I admit I wasn’t convinced by Judy’s take on the Stones’ Salt Of The Earth. There were only three originals on this album – Houses, Song For Duke and Born To The Breed. But the songs and arrangements on Judith all added up to a mature and sensitive album.

Thanks BGO, for this neat, well-packaged and freshly remastered reissue spanning an often-underrated phase of Judy’s career.

Send In The Clowns