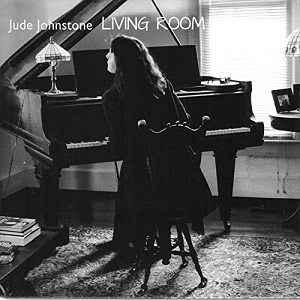 
I feel quite privileged to have reviewed this album. I had heard of Jude Johnstone before but had never properly checked out her music, so I'll give you a flavour of just why you should. "Living Room" is a slow paced but never lazy album that deserves a deep listen. With Johnstone at the lead, this is a truly collaborative work that involves some of the finest American musicians, session musicians, and songrwriters: Hunter Nelson, Tim Hockenberry, Ben Glover, keyboard and accordion player Matt Rollings (Eric Clapton, Johnny Cash, Lyle Lovett), percussionist Mike Meadows (Willie Nelson, Kris Kristofferson, Ray Wylie Hubbard, Shawn Colvin, Mary Gauthier…). The sleeve notes read like a Who's Who to an album that has quality written through it like a stick of rock.

That Johnstone's songs have been covered by the likes of Emmy Lou Harris, Stevie Nicks and Bonnie Raitt should also whet your appetite, but this work has her own stamp clearly embossed. Equally at home as a lead and backing vocalist, Johnstone co-produced the album with Michael Hanson in Nashville. Some would class this as 'easy listening', but they would be wrong. This is a beautiful piece of work that demands much more attention than that.

"Is There Nothing" is a song about the breakup of a relationship, and the grief that many of us have felt when someone we love dearly leaves us behind for another. Lyrically sensitive with Johnstone's vocal and piano is supported by a subtle cello accompaniment from "Cello Bob" Bob Liepman, whose silky skills grace half the songs on this album. "My Heart Belongs To You" continues the theme but with a Celtic feel to it. This song is real single quality. It's chorus and overall structure is Springsteenesque. So it should be no surprise to learn that Johnstone was 'discovered' in 1979 by none other than Clarence Clemons.

The album takes a twist with "That's What You Don't Know". Hunter Nelson takes the lead vocal with Johnstone's sublime backing vocals providing a perfect balance. The song considers the perspectives we hold about people we don't know, be they stars of film and music or just someone you pass in the street: 'You only see me riding / Into the neon glow'.

"All I Ever Do" is positively anthemic and returns to the theme of relationship breakdown: 'All I ever do is forget about you' will resonate with anyone who's had the experience. Tim Hockenberry provides the backing vocal. "One Good Reason" has a Carole King quality about it. You can almost hear her singing it, yet this is very much Johnstone's ownership, simply yet classily delivered in the style that you better understand after listening through this whole work: 'So go ahead and try /Practise your goodbye'.

Co-written by Maggie Doyle, Brandon Jesse provides the deep resonant vocal for "Serenita", which continues the lyrical theme while at the same time giving the album a perfectly timed musical lift, with the pace then slowing for Johnston to deliver the short but powerful ballad "I Guess It's Gonna Be That Way". By comparison, "Seasons Of Time" has a spring in its step, equating the permanence of nature to that we experience with love: 'The waves are a rollin / To a music that never ends'. Ben Glover lays down a fabulous lead vocal & 'the petite powerhouse' Olivia Korkola guests on violin.

The spirit of collaboration on this album is an inspiration and a lesson to anyone in the music industry who thinks that solo is the only way! Tim Hockenberry duals the lead vocal with Jude Johnstone for "So Easy To Forget" and backs the song with his trademark trombone sound. "Paradise" is a stunningly beautiful solo song with which to end the album: just Johnstone and a piano as if to remind us that solo is good too, so long as you have this level of talent to be able to pull it off.

"Living Room" has a dreamy, bluesy, country quality and while it is not normally the style of music I listen to, this is a compelling album from start to finish, and so Jude Johnstone may have a new fan!

All I Ever Do