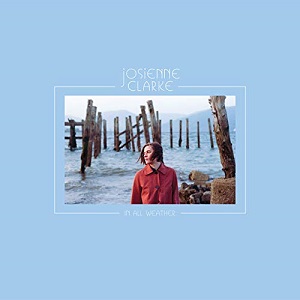 
Only this spring, songwriter and singer Josienne Clarke emerged from a turbulent and distinctly harrowing period of personal crisis during which she split from both her long-time musical partner (and fellow award-winner) Ben Walker and her boyfriend, and relocated from London to the island of Bute off Scotland's west coast. Artistically drawing a line under her musical past, the defiantly self-reliant Josienne released a three-track digital single back in April, the A-side of which (Things I Didn't Need) plaintively (and perhaps almost too insightfully) voiced self-delusion in the form of "a love song to myself from the perspective of the fragile male ego; something I've come to know better than I'd care to"; to which one of the pair of songs on the B-side, the sharply incisive Never Lie, constituted a direct response. The single can be seen as a clear primer-cum-taster for the dark and often uncomfortable truths to be revealed in Josienne's first full-length solo outing In All Weather, which heralds a fresh chapter in her life as she undergoes the difficult and complex process of "moving on but not forgetting; of regaining self-worth and self-understanding and gathering lessons learnt". In outlining the rationale for her songwriting, she is careful to draw the distinction: "In this album I have something I want to say, something I need to express rather than to communicate. Something to remind myself of, lessons to learn, stuff to accept."

And thus the album takes its cue from the line in its opening song, a kind of stall-setting prologue that provides its title, in focussing on Josienne's new-found resilience in "learning to sail in all weather", encouraging us to do what she herself did ("to right ourselves when things feel turbulent and uncertain … to correct your course and stay true to the things you believe and need and let go of the rest"). Her intention in writing these songs, then, is both explicit and clear-sighted: "these are life songs, lifelines to save me from sinking. Each one a hard-won lesson in how not to do things next time …a manifesto of how to leave and how to change. How to realise, recover and restore. It's about acceptance of things I cannot alter. It speaks of both my hopelessness and of my hope." Indeed, the concept of acceptance (and its value) recurs throughout this album; and "sometimes nothing is the solution, releasing yourself from the obligation of trying to fix an unfixable thing. Admitting defeat and letting the loss bring you peace instead." Wise words from that hard-won lesson - as expounded in a number of the album's songs, from the title song and progressing through Seconds to Walls And Hallways which embraces "the calm, sad resignation and acceptance of the inevitable ending". And the acceptance of change (and moving on), which is voiced on Leaving London and, even more memorably, on The Drawing Of The Line, a tellingly wistful observation which to my mind could almost be taken for a lost Sandy Denny song (an impression reinforced by Josienne's phrasing and delivery). This last comparison aside, the album's only readily discernible hint of folksong is My Love Gave Me An Apple, an answer ballad which debunks the original traditional folk song's emblems of unconditional affection, now seeing them as empty tokens of affection, empty gestures lacking in truth and substance.

If I Didn't Mind is a vivid expression of "a slow death by a thousand slights", the distortion of reality by "gaslighting" (emotional and psychological abuse); it documents the state of mind of someone trapped in a toxic and dysfunctional, passive-aggressive and emotionally manipulative relationship. The lyrics are intoned to a nagging, throbbing, pulsing electric Joy-Division-style indie-rock backing that cuts the silence stabbing it like a knife. The following song, Host, is quite possibly the album's bleakest moment, a sinister and doomy encapsulation of the state of affairs where "reconciliation is no longer an option, talking is just wasted air, understanding isn't out there. You aren't cared for, you are merely a survival mechanism for another damaged person, who doesn't know you, who doesn't want to know you" - and this is an extremely painful realisation.

Season And Time explores the conundrum that "communication through song is both a great and an ineffective way to convey anything" (here the song is given a different, more fragmented and jittery musical treatment than the simpler fingerpicked guitar arpeggios of the single version). Slender, Sad And Sentimental represents Josienne's (tongue-in-cheek) concession to "writing about writing a catchy single in the style of a catchy single". The discordant inner voices of Fairweather Friends play out their pithy truth before Dark Cloud deliberately mirrors the Irving Berlin standard as it transforms an impending storm into blue skies. The lonesome sound of a saxophone then ushers in the album's concluding defiant statement of acceptance and reinforces its central theme; Onliness signifies both solitude and singularity, being one of a kind and alone, recognising and accepting this and choosing to leave (the relationship); therefore, "the loneliness of Onliness is only how you feel about it… and I feel ok about it", Josienne offers.

In All Weather is an exceptionally convincing original artistic statement. First, in that each song is striking in its structural and lyrical economy, its pared-down conciseness of expression that yet conceals considerable depths of experiential insight. Second, in that the dark beauty and pinpoint precision of Josienne's voice can pierce consciousness "like a needle in my ear", and can also be as heartbreaking as it can be soothing, Musical textures are startling and arresting without needing to shout, and although on occasion their sheer atmospherics might to some listeners initially seem at odds with the lyric invention (for these songs are not like conventional poetic settings), the strangely limpid layerings (guitars, keyboards, programming, harp, bass, soft-brushed drums) can be heard to tell their own story, both in counterpoint and accompanimentally. Having said that, a simultaneous perusal of the lyrics is I believe essential to a fuller appreciation of Josienne's thoughts, feelings and resolutions. (The chosen light-blue or white lettering for the foldout sheet and cover tracklist doesn't help in this regard, however.)

With immense strength of resolve and a great deal of soul-searching, Josienne has clearly come out the other side of some very difficult times, after asserting that "I wanted to be an island, to sink or swim on my own, to construct and exist as a singular entity, to fail or succeed at my own hand." By virtue of her "onliness", she sure has succeeded with this album. Her integrity demands maximum respect.